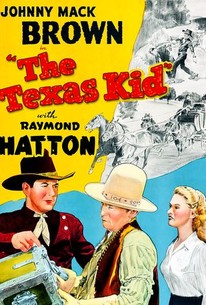 Though the film's title is The Texas Kid, the film's star Johnny Mack Brown plays a cowboy named Nevada. The titular "kid", played by Marshall Reed, is a former bandit leader who decides to go straight-and gets a bullet in his back for his trouble. Nevada and his sidekick Sandy (Raymond Hatton) take over from the Texas Kid, seeing to it that the stagecoach carrying the payrolls for local ranches aren't molested by the Kid's old gang members. As Monogram pictures go, this one goes rather well, with some well-lensed location shots. The Texas Kid was scripted by Lynton Brent, a general-purpose actor who also plays a small role in the film; Brent is perhaps best known today for his work in Columbia's "Three Stooges" comedies.

Critic Reviews for The Texas Kid

There are no critic reviews yet for The Texas Kid. Keep checking Rotten Tomatoes for updates!

There are no featured reviews for The Texas Kid at this time.