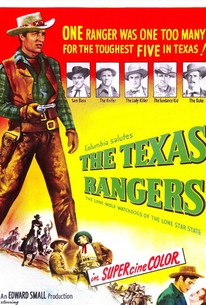 Not a remake of the 1936 film of the same name, The Texas Rangers is an enjoyable second-echelon western from the Columbia Pictures mill. George Montgomery stars as Johnny Carver, a former outlaw serving a life sentence in prison. Carver is given a second chance by the Texas government. Here's the deal: if Carver will deliver his old gang to justice, he'll be set free for good. But Carver is more interested in exacting vengeance against The Sundance Kid (Ian McDonald), the gunslinger responsible for his arrest. When this personal vendetta results in the death of his own brother, Carver vows to "play straight" and complete his original mission. Future TV-favorite Gale Storm co-stars as a feisty female newspaper editor. In addition to the Sundance Kid, other real-life outlaws depicted in The Texas Rangers include Butch Cassidy (John Doucette), Sam Bass (William Bishop) and John Wesley Hardin (John Dehner).

Ian MacDonald
as The Sundance Kid

Critic Reviews for The Texas Rangers

Action-packed B Western about the Texas Rangers.

There are no featured reviews for The Texas Rangers at this time.