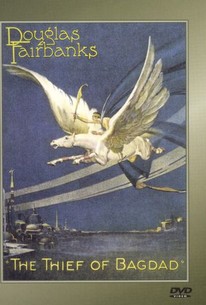 The Thief of Bagdad Photos

Douglas Fairbanks is at his most graceful and charismatic in one of the classic silent films of the 1920s. As the thief of Baghdad, his movements are dance-like -- nothing like the athletics he performed in most of his other films. In this Arabian take, the thief ignores the holy teachings and sneaks into the palace of the Caliph (Brandon Hurst). All thoughts of robbery slip away, however, when he sees the beautiful princess (Julanne Johnston). Princes have come from many faraway lands to win the princess' hand (and it's amusing to watch her face growing ever more alarmed at their arrival, because each one is uglier than the last). The thief disguises himself as a prince and the princess falls in love with him. After having a pang of conscience, the thief confesses all to the Holy Man (Charles Belcher), who sends him to find a magic chest. He braves many obstacles to get it, and when he returns he discovers that the Mongol Prince (Sojin) has taken over the city. Using the chest, the reformed thief creates armies of men out of nothingness and recaptures the city. He then uses the cloak of invisibility to spirit the princess away on a magic carpet. Fairbanks stole some of the special effects for his film from Fritz Lang's Der Müde Tod, which he had purchased for American distribution. The Thief of Baghdad, with its look of unrealistic beauty (courtesy of art director William Cameron Menzies), was not fully appreciated in its day. Because of its huge cost (two million dollars -- a real fortune in those days), it made little money. After that, Fairbanks stuck closer to the swashbuckling persona he felt his audience wanted.

Douglas Fairbanks
as The Thief of Bagdad

Julanne Johnston
as The Princess

Snitz Edwards
as His Evil Associate

Anna May Wong
as The Mongol Slave

Charles Belcher
as The Holy Man

Sojin
as The Mongol Prince

K. Nambu
as His Counselor

Winter Blossom
as The Slave of the Lute

Etta Lee
as The Slave of the Sand Board

Brandon Hurst
as The Caliph

Tote Du Crow
as The Soothsayer

Noble Johnson
as The Indian Prince

Mathilde Comont
as The Persian Prince

Charles Stevens
as His Awaker

Sam Baker
as The Sworder

Critic Reviews for The Thief of Bagdad

The Thief of Bagdad is a film which will exhaust fans' superlatives for some time to come. The flying carpet particularly makes childish dreams come true.

It is an entrancing picture, wholesome and beautiful, deliberate but compelling, a feat of motion picture art which has never been equaled and one which itself will enthrall persons time and again.

The film's 149-minute running time might test the patience of even the most devout silent film fan, but the decadent costumes, elaborate sets, and Fairbanks's copious talents provide more than enough baroque pleasure to pass the time.

It is like reading the Arabian Nights at one sitting, with only six minutes allowed to stretch the limbs and get the contrast of a workaday world.

Douglas Fairbanks is magnetic in this fun early adventure.

Walsh's dynamism is evident in every frame of this deftly Americanized fantasy, beautifully designed by William Cameron Menzies.

The Thief of Bagdad has a marvelous fairy tale quality -- a romantic sweep lifts the audience and vaporizes it into pink, fluffy clouds. It also has much beauty and much solidity of dramatic construction.

If you can separate the lazy stereotypes and cliches peddled by this "Arabian Nights fantasy" from your appreciation of the inspired movie-making in front of you, you'll enjoy The Thief of Bagdad for what it is: Hollywood spectacle at its most lavish.

The Thief of Bagdad (1924) is Raoul Walsh's timeless and expensive silent costume fantasy. It was a lavish and bold Arabian Nights swashbuckler-adventure film - and an epic, spectacular accomplishment in production design and revolutionary...

One marvel after another

Technology may have changed drastically in the nearly 90 years since this movie was produced, but some things never go out of style.

Whether committing petty crimes or proving his worth against a series of terrifying beasts... Fairbanks oozes preposterous, child-like charisma.

Audience Reviews for The Thief of Bagdad

Borrowing extensively from ballet this masterpiece tells its story as if you were at the back of a theater and unable to hear the actors on the stage (and yet they are aware of your presence, play specifically to your pleasure) and so nearly every movement and gesture is played BIG, even the sets are BIG ...so that little ol' you at the back understand it all. In the midst of all the grandeur Douglas Fairbanks, a dance wunderkind, every move screaming youth and vigor and finesse (you quickly understand that here is the guy who invented parkour, as there is no set piece, no furniture, no expanse, that this guy doesn't see as a personal challenge to leap over). There's a story here too, something about rising above your station, seizing the day, etc., etc., and there's the American racist penchant in evidence but mostly a old school tale told the old school way. Enjoyable.

The first half of the movie is a predictable romantic comedy type story, but it changes in the middle and gets exciting as the thief goes on an epic adventure to win the princess. This is a really long movie, a little too long, but it's got some really cool special effects in the second part and Fairbanks is awesome as usual.

silent "thief of bagdad" is raoul walsh's lush classic with original swashbuckler douglas fairbanks in the imaginatively turbulent exotic land of arab...it is intertwined with the bizarre outlandishness of persia, india, china as well as the essence of arab under intepretation of the primary stage of hollywood aesthetism. the visuality is mythically expressionistic thrived with every stroke of riotous imageries, such as the prophetic magic crystal upon the pupil of indian buddha with multiple hands, the swirling marine palace with mermaids, the flaming caves within the moon and the mongol eccentric courtesies.....of course, it also includes the cameos of the first chinese american hollywood star, anna may wong as the undercover mongolian slavegirl who doublecrosses the princess. inevitablly chineses are the ultimate villains douglas fairbanks have to confront then conquer. fairbanks stars as the title role, theif of bagdad, who is a frivolous but resourceful man abiding upon the life philosophy of grasping everything he wants at once...an incorrigible crook who lives for his own pleasure...he enjoys his unrepetant thieveries until his arms are set upon the fair chaste princess of bagdad, so he gotta earn himself a honour of prince by seeking the rarest treasure on earth seperately with his competitors: princes of persia, india, and mongol...how shall he overwhelm the persian flying carpet, indian crystal ball and mongolian healing golden apple? eventually chinese mongols are the evil ones who entrap the princess then besiege bagdad with insidious ambush...the odd thing is mongols are all dressed in the constumes of merchurian dynasty in the last century of china as if it's whimsical pastiche of silent hollywood with all the background extravagenza which functions highly upon human endeavor in the age without CGI...the result might be blatantly exposable but still a granduer visual feast....most of all, our athletic swashbuckler douglas fairbanks is flamboyantly dashing enough to live up as the fearless romantic hero. "theif of bagdad" is somehow the best exemplification of the so called "american orientialism" with a distorted image upon the east by dismissing it as "primitive, slavish, exotic, manipulative, and amoral," particularly upon china. arab, persia, india and china are all "orient" by the ancient definition of the occident, so " the more eastern the more twisted" would be the principle to comply. personally, as what i mentioned before upon "the shanghai gesture," at least being "primitive, slavish, exotic, manipulative, and amoral" is still uncompromisingly edgy with its luring characteristics. so far, the coolest asian hollywood star to me is still anna may wong with her quirky orientalness blended in the sensuality which populates in 20s~40s.

My favorite version of the Arabian nights tale is this wonderful, timeless epic fantasy with a great acrobatic performance by Douglas Fairbanks. magical ride for all of us who are still kids.

The Thief of Bagdad Quotes