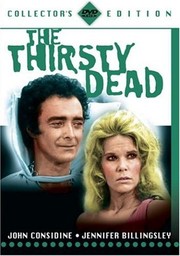 Wes S
December 1, 2013
Confusing story with hollow characters and choppy editing. The dialog is dull and the film never seems to kick off or make much sense.

Kristian M
April 25, 2011
A cult kidnaps women and uses their blood to create an elixir of immortality... the most accurate portrayal of Scientology ever filmed.

Super Reviewer
Greg S
½ February 22, 2011
Four (American) women in the Philippines are kidnapped by a cult who drink blood for eternal youth and worship a guy named Raoul whose head they've preserved inside a brick of cherry jello. Nice sets and scenery (including the scantily clad female cast) are the only real points of interest in this stupid, stupid film.

Super Reviewer
Aj V
½ January 1, 2011
One of many weird cult themed movies of the 70s, this one has a cult of "vampires", they're really just blood drinkers. It's not all that interesting after you learn that. The actors aren't good, the story isn't great either. I wouldn't recommend seeing it.

Super Reviewer
Brody M
December 23, 2010
I think this movie is 1 of those movies that are so bad its good & thats why I kinda enjoyed it even though I fell asleep a couple times & had to keep hitting rewind.

Richard G
September 29, 2010
Women get Kidnapped to an island where their blood is needed by a cult in order for the Members of the cult to become immortal,its a total Suck fest,terribly acted and terribly Made,an awful film of stunning tedium.

Stuart P
April 28, 2010
I watched this movie awhile ago, and I can't, for the life of me, remember a damn thing about it. Evidently, I was having a good time. And this movie sounds awesome.
In any case, I found the notes to the review I wanted to write, and here they are, exactly as I found them:

Ah, boobies.
A true horror movie has a bongo theme.
Bongos and boobies.
If I were ever going to marry a man, I'd marry Francesco. He has an awesome jacket.
Francesco's woman just got stole by jawas.
So, the jawas are Indians . . .
Italian women are very placid if you kidnap them. They just look around. They don't try to escape. They're quiet. Always try to kidnap Italian women.
Bimbos bimbos everywhere.
Seek the guidance of Raoul.
Raoul must be a giant jello mold with a head in it. Your movie can only go so far when your bad guy is a fruit cup.
Tom Jones sings to Raoul in order to communicate.
They confiscated an old Star Trek set for this movie.
Time for a panicked run through the Star Trek set.
Wake up smelling the hand of the bloody old woman.
He's like the tribal James Brown.
"This madness is insane!"
So, Tom Jones dresses up like a Star Trek James Brown and gets saucy when chicks knock the blood bowl out of his hands.
Laura has the feminine appeal of Tom Petty.
My, that was a very long "snake-around-the-ankle" scene.
Tom Jones, Jungle Explorer.
"There is only one way through the jungle, and the others know it as well as I."
Her emotions are just shades of disgust.
Who knew Tom Jones could be such a load.
Never put a ninja star down the front of your pants.

That's it.
I don't really remember what the hell happened. Sounds like a lot of fun, though.
If I watch it again, I'll get back to ya on it.

Michael S
October 6, 2009
What is this 1970's movie about? Scantily clad women being kidnapped and used by a cult as a source of blood for their immortality.

Women in cavewoman type costumes, I can handle... but bald men running around the jungle (which looks like it's mostly comprised of pine trees by the way) wearing nothing a loin cloth, is a bit harder.

Jason H
½ August 12, 2008
Truly awful, boring movie with few redeeming qualities. One of the worst...I feel sick knowing I wasted 86 or so minutes on this.

Heather L
½ June 3, 2008
Despite a relatively well-accomplished cast (in TV terms), this movie is terrible! TERRIBLE! In addition to a meandering plot involving some blood-drinking cult of immortals, the movie seems terrible racist, portraying various people of color as stupid "savages."

Furthermore, I have routinely seen better costume design from local dance studios--and that's saying a HELL of a lot.

Brenn-o-gistics
½ May 19, 2008
I unfortunatly watched this movie all the way through and im sad to say that i found it enjoyable for the sheer shitballs of this movie. a rated pg movie about i dont even know what the fuck its supposed to be. the zombies don't appear until the last 10 min. and with some god aweful acting, its hilarious

Norm V
½ May 18, 2008
Even for the good folks at Something Weird Video, this one is a drag. Extremely slow moving and dreary. No action whatsoever. I'm sure there isn't one person in the world who likes this "movie".

Grëg W
April 2, 2008
this movie was just plain stupid. the 70s style clothing just threw me way off. as a cult, i wouldn't really wanna look like a gay version of a wannabe star trek convention. the acting also suffers a lot throughout this movie. i still don't understand the old green lady either.

Tracey P
April 1, 2008
Put down the remote and slowly back away from the TV when you see this one show up. Consider it a good time to go hiking or something.

Rob V
March 30, 2008
Boy, this is just crap. In the hands of a decent director and some believable actors, this might have been a decent little schlockfest. Unfortunately, this is just a dreary, boring trek through the jungle. Some of the sets look like old 'Star Trek' castoffs. What a waste of time.