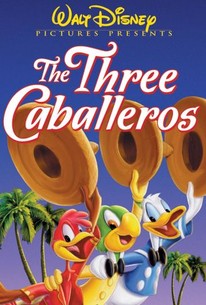 Critics Consensus: One of Disney's more abstract creations, The Three Caballeros is a dazzling, colorful picture that shows the company at an artistic acme.

Critics Consensus: One of Disney's more abstract creations, The Three Caballeros is a dazzling, colorful picture that shows the company at an artistic acme.

Critic Consensus: One of Disney's more abstract creations, The Three Caballeros is a dazzling, colorful picture that shows the company at an artistic acme.

Three Caballeros is the first Walt Disney feature to combine animation with live action footage. Originally conceived as World War II propaganda promoting good relations between the United States and Latin America, the film details the adventures of Donald Duck as he meets two Latin birds--Jose Carioca and Panchito,--and the three head down to Rio. The film doesn't have a concrete story, choosing to follow the three animated birds through Latin America, as they sing a number of songs, get into trouble and have a number of very amusing experiences. Filled with achingly funny jokes, good music, and stunning, ground-breaking animation, The Three Caballeros remains extremely entertaining decades after its release. It is one of Disney's unacknowledged classics.

Aurora Miranda
as The Brazilian Girl

Critic Reviews for The Three Caballeros

That rare event, a Disney failure.

It's a gay, colorful, resplendent conceit.

The menu buttons are shaped like sombreros. I trust I needn't say more.

A brilliant hodgepodge of Mr. Disney's illustrative art-a literal spinwheel of image, color and music which tumbles at you with explosive surprise.

No other Disney feature achieved this level of exuberant abstraction, or displayed the same sheer pleasure in the magic of the animator's art.

...in the running for the most rambunctiously-surreal thing ever issued by the studio...

In those small doses it could be very charming but as a movie it is tough.

less of a propaganda piece and more of a narrative story

By far the strangest feature-length movie in the history of the Walt Disney Company, with virtually every new minute bringing something more insanely creative than the last.

This is one of the most dazzling achievements of the cartoon genre.

The two films are as artistically astonishing as they are culturally clueless.

Audience Reviews for The Three Caballeros

A solid follow-up to Saludos Amigos that combines animation and live action with sheer perfection, even if it is a bit irregular and only really amusing until the last ten minutes, when it goes in Fantasia mode Latin style and freaks out in a mad and tedious psychedelia of colors and music.

Number 2 From Compilation era The animation is a bit more interesting then the previous film, and it does have it's fun moments throughout. It's hard to give this era of films a long thorough review because when it comes down to it some shorts were fun and others weren't. Next up: Make Mine... hmm third word that begins with M what could it possibly be.

Great sights and sounds of South America made in this Walt Disney colourful, sweetly nostalgic, forties flavoured travelogue which highlights some of the more exotic cities of Latin America with my favourite Disney cartoon character, Donald Duck with Joe Carioca and Panchito the Charro Rooster as tour guides.

Cute movie - watched it a couple of years ago on a date, so it has some strange connotations. Typical Disney fluff.