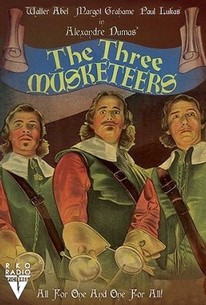 This first talkie version of Dumas' The Three Musketeers had been planned by RKO Radio as a John Ford production, with Francis Lederer as D'Artagnan. By the time the film emerged on screen, Rowland V. Lee was in the director's chair, with the talented but uncharismatic Walter Abel in the D'Artagnan role. Equally unengaging were Paul Lukas, Moroni Olsen and Onslow Stevens as Athos, Porthos and Aramis, while Margot Grahame was more petulant than menacing as Milady De Winter. Like most filmed adaptations of the Dumas novel, this Three Musketeers concentrates on the episode of the Queen's purloined necklace; the story ends on a misleadingly happy note, with heroine Constance (Heather Angel) alive and kicking at film's end (which she certainly wasn't in the novel). Except for some excellent swordplay -- especially during the opening credits -- this is considered the dreariest of the many versions of The Three Musketeers.

Ralph Forbes
as Duke of Buckingham

Ralph Faulkner
as Jussac
View All

There's a lot of hard galloping and lively swordsmanship, however, to help things along, and on the whole it's a good picture to take the family to on Saturday afternoon.

To us oldsters, with the memory of Douglas Fairbanks, the elder, ever green in our hearts, Abel's performance is a little too impetuously boyish... In fact, none of the cast was quite glamorous or gallant enough for me.

There are no featured reviews for The Three Musketeers at this time.