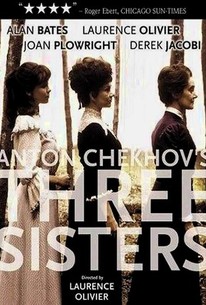 Russian playwright Anton Chekhov's three upper-class Prozorov sisters -- Masha, Olga, and Irina -- come no closer to their dream of returning to Moscow in director Laurence Olivier's 1970 film version of Three Sisters than they did in Chekhov's original 1900 play. This melancholy classic about shattered dreams, self-delusion, and compromise was directed by Olivier for Britain's National Theatre in 1967. The film, a literal record of Olivier's stage version, was produced in order to raise money for the ever-imperiled National. Olivier, who'd just recovered from a serious illness, plays the mischievous army doctor Chebutikin, while Olivier's wife, Joan Plowright, essays the major role of Masha, the snobbish general's daughter who tries to escape the stultifying banality of her provincial marriage by having an affair. Three Sisters was released in the U.S. in 1974 as part of the American Film Theatre series. ~ Hal Erickson, Rovi

Critic Reviews for The Three Sisters

There are no critic reviews yet for The Three Sisters. Keep checking Rotten Tomatoes for updates!

Audience Reviews for The Three Sisters

This was very boring. The play/book was much better.