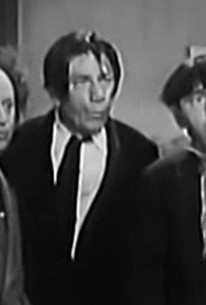 Shemp Howard plays a vocal coach in this Three Stooges short. His most adoring student is a homely young miss who cheerfully mangles "The Voice of Spring." As soon as her lesson is over, Moe and Larry show up and inform him that his Uncle Caleb has left him a half a million dollars -- provided that he is married by six o'clock that evening. Shemp needs a bride in a hurry, so he heads to a phone booth with his little black book and a handful of nickels, but he only manages to get tangled up with Moe. Then he sees a pretty girl (Christine McIntyre), who's a new resident in the building, but she turns out to be a violent psychopath. Shemp has no choice but to take his awful voice student to the altar, but as the justice of the peace (Emil Sitka) is preparing to wed them, an angry group of Shemp's former girlfriends show up -- Moe ran a notice in the paper announcing his dilemma. The women battle furiously to become Shemp's bride, and the Stooges are all the worse for wear. The semi-conscious Shemp manages to say "I do" to the singing student, and when he comes to and realizes what he's done, his response is to scream, "Help!" If this short bears a few similarities to the Buster Keaton silent Seven Chances, it could be because writer Clyde Bruckman worked on both films. Emil Sitka's line, "Hold hands, you lovebirds," was immortalized in Pulp Fiction -- it can be heard while John Travolta is pumping a hypodermic full of adrenaline into the overdosed Uma Thurman.

Critic Reviews for The Three Stooges

There are no critic reviews yet for The Three Stooges. Keep checking Rotten Tomatoes for updates!

Audience Reviews for The Three Stooges

There are no featured audience reviews yet. Click the link below to see what others say about The Three Stooges!