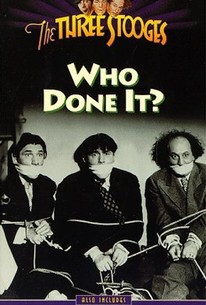 Who Done It? Photos

The Three Stooges play inept detectives in this Columbia comedy. Wealthy Mr. Goodrich (Emil Sitka) is very nervous because the Phantom Gang has been knocking off men just like himself, and he has been informed that he will be next. He frantically calls the Alert Detective Agency because the detectives he has hired are late. It turns out they are the Stooges, who have been robbed and bound. With the help of the security guard, they free themselves and head for Mr. Goodrich's home. Unfortunately, the old man has already been knocked unconscious and they're greeted by the gang, one of whom is Goodrich's butler. The female member (Christine McIntyre) claims to be Goodrich's niece, and sneaks poison into Shemp's drink, sending him into a spasmodic (and very funny) fit. A big goon proceeds to chase the Stooges up and down the halls of the house, but they manage to evade him long enough to find Mr. Goodrich in a hidden panel. "A corpus!" says Shemp. But Goodrich isn't dead, merely stunned -- he's a fine music lover and the gang tortured him by forcing him to listen to singing commercials. The crooks gang up on them and Goodrich turns out the lights. The ensuing melee goes on in darkness, punctuated whenever someone lights a match (generally to say a one-liner). When the lights come back on, the crooks have all been knocked cold, thanks to Shemp's use of a small fireplace shovel. While showing off his moves, he knocks the other Stooges and Goodrich unconscious. Dismayed by what he's done, he knocks himself out, too.

Critic Reviews for Who Done It?

There are no critic reviews yet for Who Done It?. Keep checking Rotten Tomatoes for updates!

There are no featured reviews for Who Done It? at this time.

Who Done It? Quotes