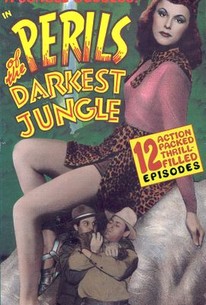 The most obvious discrepancies concerning this otherwise well-remembered cliffhanger from genre specialist Republic Pictures are the quite demure-looking leopard outfit worn by the serial's heroine, Linda Stirling, and that Darkest Africa looks suspiciously like the hills of suburban Chatsworth. Apparently, producer William J. O'Connell acquired the leopard costume on the cheap but too late for the title to be changed, and the location never really mattered to Republic's mostly juvenile target audience. Making her serial debut, Stirling's innate athleticism came in handy playing Kay Arnold, an heiress turned Jungle Goddess who helps oil company representative Allan Lane fight off a villainous competitor headed by unscrupulous attorney Fletcher Walton (LeRoy Mason) and his henchman, general store proprietor Tom Daggett (Crane Whitley). The remaining 11 chapters had either Stirling rescuing Lane from one peril after another, or vice versa. Although not quite as independently heroic as serial queens such as Pearl White and Ruth Roland, Linda Stirling came as close as anybody, which of course was Republic's goal all along. Her sex appeal, despite the demure costume, was obvious and although this was not why she had chosen the acting profession, Linda tore into her serial assignments with legendary gusto. Ironically, the native of Long Beach, CA, had begun her career studying with Ben Bard, the widower of Ruth Roland. The serial was re-edited and released in a feature version re-titled Jungle Gold. In 1951, Republic resurrected the entire chapterplay under the title Perils of the Darkest Jungle.

Critic Reviews for The Tiger Woman

There are no critic reviews yet for The Tiger Woman. Keep checking Rotten Tomatoes for updates!

There are no featured reviews for The Tiger Woman at this time.