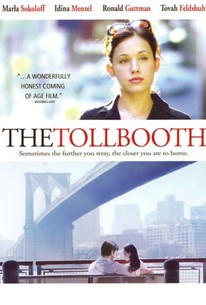 A young woman struggles to find herself despite the often oppressive influence of her family in this independent comedy drama. Sarabeth Cohen (Marla Sokoloff) has recently graduated from art school, and is determined to strike out on her own and establish herself as a painter. Her first bold step toward independence is moving away from home and getting a job in Manhattan, which doesn't do much to please her mother, Ruthie (Tovah Feldshuh), or her father, Isaac (Ronald Guttman), who don't make a secret of the fact they don't care for her artwork or her ambitions. Sarabeth's first steps toward her own life aren't very impressive -- short on money, she ends up moving in with her sister Raquel (Idina Menzel) and her sister's well-meaning but clueless husband, Howie (Jayce Bartok), and discovers her bedroom is a walk-in closet. Sarabeth also finds she isn't cut out to be a waitress, which makes the constant comparisons to her other sister, Becky (Liz Stauber), a hard-working medical student who is hiding her lesbianism from the family, all the more painful. And as Sarabeth struggles to find her place in the Big Apple, her boyfriend, Simon (Rob McEhenney), begins moving away from his own creative ambitions toward an easier life as a businessmen. The Tollbooth was the first feature film from writer and director Debra Kirschner.

Vanessa Ferlito
as Gina
View All

Critic Reviews for The Tollbooth

Watching its roster of decent actors struggling to overcome the banalities of their roles makes the price of getting through The Tollbooth very high indeed.

Plays like the unholy spawn of Brighton Beach Memoirs and Fiddler on the Roof.

Sokoloff works hard to make her aspiring artist likable, and buried deep under the mountain of clichés is a decent story of a young Brooklyn woman trying to find her own way. But to have to swallow such ham-fisted writing and direction?

In The Tollbooth, 22-year-old Sarabeth Cohen (Marla Sokoloff), a self-described 'feminist artist,' talks us through the travails of her Jewish-American family and her own coming of age.

The question of whether Sarabeth will make it as a big-city artist is less fascinating than wondering when she'll discover that her art is terrible.

In short, this film ain't kosher.

Women may recognize with shivers the struggles of twentysomething Sarabeth in The Tollbooth. And that's a bad thing.

Ambling but never less than endearing.

Audience Reviews for The Tollbooth

There are no featured audience reviews yet. Click the link below to see what others say about The Tollbooth!