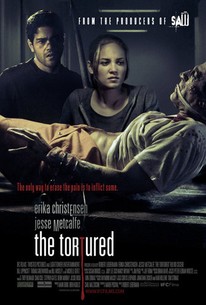 Craig and Elise had all the ingredients for an ideal life: a great marriage, a wonderful five-year-old son, a charming home and a bright future. Then, on one sunny day, their perfect world is irrevocably shattered . Leaving their five year old son, Ben, alone for only a moment, Craig is horrified to see him being abducted from their own front yard. Sadly, the desperate police search for the kidnapper proves to be in vain when the child is found dead. Months later, a chance tip leads police to the suspect's door, catching him red-handed with another victim. Although Ben's murderer is soon brought to trial, the grieving parents are stunned when his sentence is considerably reduced by a plea bargain. Together they decide to seek their own retribution, hatching a plot to kidnap the man and subject him to the same monstrous acts he perpetrated against their helpless son. -- (C) IFC

News & Interviews for The Tortured

View All The Tortured News

Critic Reviews for The Tortured

Its clichés grow slightly funny. But not funny enough to make the endless torture scenes bearable.

[It] suggests only that ferreting out new ways to inflict pain requires more imagination than anyone on hand realized.

It's a revolting horror film that wastes the talents and good looks of Erika Christensen and Jesse Metcalfe in favor of severed penises and other violent atrocities performed on a kitchen table.

The torture-porn label would stick if wasn't so hard to imagine anyone getting much out of it.

The flick gets off on surgical slicings and an overall Fincheresque gloominess, the latter becoming an unwitting joke.

Everything is one hundred percent predictable.

A stupendously inane and pointless slice of revenge-based horror whose title might as well describe the audience watching it.

The title is an apropos description of audiences who sit through this inept low-budget psychological thriller, which would be considered tasteless if it weren't so incompetent.

It's an angry picture, but that dependable sense of rage doesn't carry through to the end. Instead, the effort dissolves into a strange genre predictability.

No amount of plucked-off fingernails are going to fill this empty vessel with any semblance of a point.

Audience Reviews for The Tortured

Director Robert Lieberman crafts a torture porn revenge flick that has some sketchy but at times pretty decent performances. As far as the film is concerned, it's a decent low-budget horror outing that could have been so much better than what it turned out to be. There is so many ways that they could have made a powerful revenge horror film with these ingredients, however there's something not quite right with the way the film was executed. If the film's script could have been rewritten a bit, and its structure been refined, then you'd have a compelling and memorable horror yarn. What you have here is a film that doesn't take enough risks, while trying g to shock as much as it can. Considering the film's premise, you'd expect something exciting, thrilling and ultimately unforgettable. The Tortured in the end is just like every other Torture Porn horror film out there. Although the film's idea is very good and interesting, there's no real pay off in the end. Overall this is a decent and at times entertaining film, but it leaves a lot to be desired out of its plot. The film doesn't do anything different or refreshing in this genre of horror, and it's clear to see that this genre has run out of ideas. If you want a great revenge flick similar to this one, but that is not a horror film, watch Law Abiding Citizen. However in the end, The Tortured is a film that is just worth seeing once, and doesn't necessitate multiple viewings.

A wretched, hyper-edited, hysterical mess, put together in such a way that every artifice jumps out of the screen.

Compared to films such as "Saw" and "Hostel" as it is, this one is a hard film to judge. The acting from the off wasn't great and the immediate reaction here is that it's a film with pretty people in it. As the story unfolds, it really questions all parents out there, what would they do in this situation and where would you draw the line? Graphic in it's torture, it's not a film for everyone, the torture itself is pretty realistic. Like the twist though - didn't see it coming.