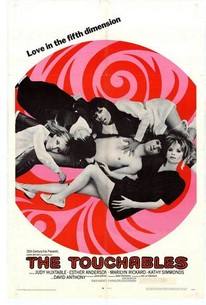 This comedy effort combines kidnaping, sex and inane intrigue when a rock & roll singer (David Anthony) is abducted by four female fans who wish to keep him for their own private boy-toy tied to a circular bed in a plastic bubble. The singer's manager and some detectives battle other criminal forces in an attempt to rescue the rocker. The best part of the feature is the song written by Steve Winwood and Jim Capaldi of the British band Traffic.

Roy Davies
as Glubb
View All

Critic Reviews for The Touchables

The rest is awful, a sort of fidgety mod pornography, which uses the advertising convention for eroticism-cutting abruptly from teasing sex scenes to gadgetry, in this case pinball machines, trampolines and odd items of furniture and clothing.

There are no featured reviews for The Touchables at this time.