The Town That Dreaded Sundown2014 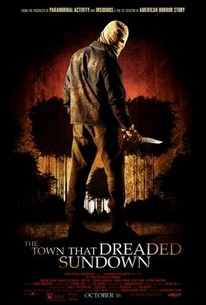 The Town That Dreaded Sundown Photos

65 years after a masked serial killer terrorized the small town of Texarkana, the so-called 'moonlight murders' begin again. Is it a copycat or something even more sinister? A lonely high school girl, with dark secrets of her own, may be the key to catching him.

Gerry May
as Newscaster

Charles B. Pierce
as Man in Diner

Beti B. Gomes-Rejon
as Preacher's Wife

Beti B. Gomez-Rejon
as Preacher's Wife

News & Interviews for The Town That Dreaded Sundown

View All The Town That Dreaded Sundown News

Critic Reviews for The Town That Dreaded Sundown

With its small-town atmospherics, a juicy supporting cast of character players, plus Addison Timlin's personable, plucky "final girl", this Town is pulled off with polished, enjoyable brashness ...

This is an exercise in nostalgia as much as bloodletting. The filmmakers are paying their very own tribute to teen-horror pics of the 1970s.

Not a straight remake of the 1976 cult horror movie, The Town That Dreaded Sundown is more a self-referential homage that takes the original film's legacy and embellishes it.

It's an odd, if somewhat original, way of playing with sequel conventions: the plot exists in a reality where the original film also exists. But outside of knowing winks, this is cookie cutter carnage.

Clever enough, but forgets to be exciting.

A film that bounds towards the cult appeal of those self-reflexive horror classics, but agonisingly doesn't quite stick the landing.

...that's my larger overall problem with The Town That Dreaded Sundown: it makes the capital mistake of thinking that graphic violence and visual panache is enough to keep its audience entertained.

So much obvious thought has gone into making the film visually striking that the script seems to have gone unread. There's no other explanation for the woeful stupidity of some of the characters' actions and the blandness of the dialogue.

While its tone wildly varies, when it comes to the glut of horror remakes, it's a slight step ahead of the standard batch.

Knowledge of the first film probably helps, but it's a nifty little genre experiment nonetheless.

A straightforward, slickly edited psycho-killer flick with moments of razor-sharp tension and a welcome appearance from Alien star Veronica Cartwright as Timlin's granny.

Those who like their shivers served up with a spattering of grey matter should leave with a sunny disposition.

Audience Reviews for The Town That Dreaded Sundown

It's not the first horror sequel/remake to engage in meta commentary, but it's probably the only one where the original film is unremarkable and mostly forgotten. As a result, the killer's desire here to be remembered takes on a unique significance. Obviously it all falls apart by the end, but the movie is still an oddity worth checking out.

Interesting, but not that great. I do like how it kind of breaks the fourth wall and plays off of the 1970s film, as well as the real events to some extent, and gives an idea of what it's like to live in a town whose history is overshadowed by horrible events.

The concept behind the film, The Town That Dreaded Sundown, is actually a lot more interesting then the film itself. From the minds behind American Horror Story, comes a tale that is based on the true story of The Phantom Killer, who was active in Texarkana, Texas during 1946. The story was originally turned into a successful film in 1975, but rather than re-make it or do a sequel, the writers went in a totally different direction, one that I've never seen before. This film takes place in 2014 and acknowledges the story and even the previous film. In fact, clips of the original film are seen throughout this movie, and even the son of the original Director plays a part in this new film, which sees the Phantom Killer return after a nearly 70 year absence. Addison Timlin stars, following her leading role in Odd Thomas, and with new challenges comes experience. While I loved Odd Thomas, I thought she was terrible, but in this film it's a complete turn around, as Timlin is the strong female lead a film like this requires. As for the film itself, besides it's interesting play on the previous film, it really wasn't much more than your typical whodunit slasher film. Interesting to note though, unlike the first film, this movie was shot at the actual crime scenes from 1946. It also marks the last on screen appearances of both Edward Herrmann (Gilmore Girls) and Ed Lauter (Shameless, ER) who died shortly after filming. I love the concept of this film, it displays just how talented and imaginative the team behind American Horror Story and the upcoming American Crime Story really are, but overall, if you've seen one slasher film, sadly, you've seen them all.

I had actually seen the original film on Netflix not that long ago and I had wanted to watch it. Unfortunately, it was taken off of Netflix I don't even know when honestly. I wouldn't even call this a remake, it's definitely more like a self-referential sequel. You see the original movie exists in this movie's "universe", if you will. In many ways it is a love tribute to that film, but it's certainly not needed. The murders in the sequel are directly taken from the original film as the murderer wants to bring up dark memories of the past. Essentially, the motivation for the murderer is the fact that his grandfather was the original Phantom's last victim, and he's carrying out this revenge, of sorts, in order to make sure that his grandfather is remembered as the victim, as they sort of push him under the rug and not a lot is known about him in the media or Texarkana. So I thought, in a way, that the film's story, while not great, is a little more thoughtful than your typical slasher. This isn't a mindless, brainless movie at all. And how it combines the first film's kills with its own story is done in a pretty unique way. So even if the kills here are almost exactly the same as the ones in the original, I still think this film manages to stand out on its own. You don't need the original to enjoy this, though I'm sure it doesn't hurt. I love me a good slasher and this one, while average, is certainly more than good enough to recommend if you've got Netflix. It's got some really nasty kills. While I wouldn't say that any of them are totally realistic, there's something more menacing about this villain than what you normally see in slasher films. Usually they're so bad that they're laughable or they're purposely goofy, like some of the later Jason, Freddy, Michael Myers sequels. Slashers have been a joke genre for years now, even with the advent of a series like Saw, which got more preposterous and convoluted with each passing sequel. But this villain is more grounded to the real world and I think it works for the best. The problem, however, comes in the fact that, at the climax, they reveal the villain's motivations to do what he did, which I already outlined. That took it a bit away from the movie, to be perfectly honest. I just think the idea of a guy going out and recreating the murders just because he can is a little more disturbing than finding out that he had a reason for it. The fact that he outlined his reasons for doing it really took me out of the film. You can still give us theories about why the guy did what he did, which Jami did, just don't actually reveal those reasons. Just leave it as a guy committing senseless acts of violence because he happened to admire a particular serial killer. I honestly think that would've been a better choice than what we got. And there's some really weird cuts and edits in this film, some of it was just really poorly edited. I like the film's cinematography, it felt very retro, like one of those old 70s slashers used to look. It was dirty and grimy, perhaps not as grimy as it could've looked, but I still liked the film's visual approach. I can't complain much about the acting at all, it's got a good cast and the acting is better than your regular horror film because of it. If it wasn't for the issues I mentioned, I would've had no problem giving this film 3 stars. I really do think it was held back by the issues. But we don't get many good slashers per year so, when you have an average one, that's pretty much the same thing as saying that it's good. A solid Netflix watch.

The Town That Dreaded Sundown Quotes