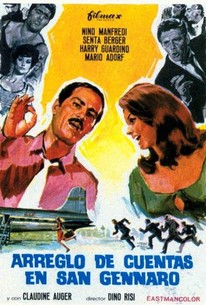 In this comedy, two Yankee con artists pose as tourists visiting scenic Naples. There they intend to rob an old church. Before pulling the caper, the two enlist the aid of a local criminal. The theft succeeds, but afterwards the crooks begin double-crossing each other. Murder and mayhem ensues as one American murders the other and then heads for the airport dressed as a nun. "Her" loot is, in turn, captured by the Italian crook and his friend. The local thief then heads for Switzerland accompanied by a bogus "cardinal" who protects him. Unfortunately for the crook, the cardinal turns out to be the real thing and takes the treasure back to its original home.

Solvi Stubing
as the sister
View All

Critic Reviews for The Treasure of San Gennaro

Since very few gang, jewel-theft color films are done in deadly earnest, it is not quite clear to me where the genre ends and its spoof begins.

Audience Reviews for The Treasure of San Gennaro

Dino Risi films are for me synonym of a bit ourageous, over the top, silly but delightful sense of humour. this is a prime example of it, a hilarious caper movie with an excellent Nino Manfredi.

The Treasure of San Gennaro Quotes