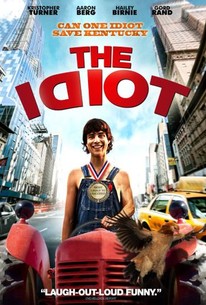 A backwoods bumbler becomes a local celebrity as he attempts to impress his pretty girlfriend by training for the Olympics, but finds his efforts continually thwarted by the town's sleazy, scheming mayor, who wants the girl all to himself. Dingus McGraw (Kristopher Turner) is convinced that he has what it takes to win the gold. And should he succeed, perhaps his girlfriend Excel will finally be prepared to consummate their relationship. Unfortunately for Dingus, Mayor Tyson also has his sights set on Excel. Later, in an attempt to disgrace Dingus in front of Excel and the rest of their small town, Mayor Tyson brings in a hulking former Olympian from Russia for a match that the local Olympic hopeful just can't win. ~ Jason Buchanan, Rovi

Critic Reviews for The Triumph Of Dingus Mcgraw: Village Idiot

There are no critic reviews yet for The Triumph Of Dingus Mcgraw: Village Idiot. Keep checking Rotten Tomatoes for updates!

There are no featured reviews for The Triumph Of Dingus Mcgraw: Village Idiot at this time.