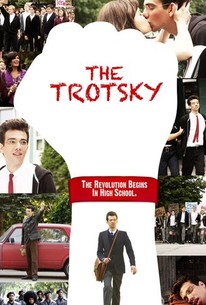 An unusually intense teenager gets the idea that his name defines his destiny in this offbeat comedy. Leon Bronstein (Jay Baruchel) is a young man who has made the discovery that his birth name is the same as that of Leon Trotsky, the celebrated Russian revolutionary and socialist theorist. This coincidence leads Leon to believe that he is the reincarnation of Trotsky and it is his destiny to follow his path as closely as possible -- which is a bit difficult when you have rich parents and attend an upscale private school in Montreal. Leon's father (Saul Rubinek) gives his son a part-time job in one of his clothing factories, and within a day Leon is leading his fellow workers in a sit-down strike. Father isn't amused and punishes Leon by making him attend public school, but there the world-be revolutionary finds new ways to battle fascism -- which in this case is represented by Principal Berkhoff (Colm Feore) and Mrs. Davis (Domini Blythe), a teacher eager to give her students detention. Leon's pursuit of social justice causes him to fall in with Frank (Michael Murphy), a burned-out activist-turned-college professor, but Leon also finds himself infatuated with Frank's current girlfriend -- who, like Trotsky's great love, is named Alexandra (Emily Hampshire) and is nine years older than he. Directed by Jacob Tierney, The Trotsky was an official selection at the 2009 Toronto International Film Festival.

Critic Reviews for The Trotsky

Handful of gags fall flat and those who can only handle low doses of Barchuel may grow tired of his shtick, but it's a curiously enjoyable experience and educational, too.

Tierny's script is smart and funny although some of the jokes are likely over the heads of a teen audience, who may not be up on their Russian revolutionary lore.

Runs 20 minutes too long and several rungs above the head of its target audience.

Certainly the film is cute in places, but the larger ideas that little Leon is messing about with are never any more than cardboard cutouts, a child's approximation of political thinking.

Baruchal gives a charming performance, full of intellectual wit and good-natured charisma, but also take-charge sex appeal, albeit of the nerd variety.

If Norma Rae and Ferris Bueller's Day Off had a child, you've got to think it would probably be a lot like The Trotsky, a smart - if overlong - indie teen comedy.

If it weren't for Jay Baruchel's disarming charm and natural sense for comic delivery, "The Trotsky" wouldn't work anywhere near as well as it does.

The Trotsky is an endearing comedy that at times flirts with greatness, and those times are courtesy of Jay Baruchel's performance.

There's a solid sense, in its many subversive comical moments, that beyond the private emotional immediacy of Blackberries and Palm Pilots we are all propelled inside this larger, constantly evolving collective force called history, no matter what age.

Audience Reviews for The Trotsky

The Trotsky is a charming but flawed teen comedy set in Montreal, about a wanna be radical without a cause, Leon Bronstein (Jay Barchel), who tries to start a pointless Communist revolution in his high school. Leon believes he is the reincarnation of his namesake, Leon Trotsky, and that his life will parallel his famous namesake. It gets by on the charisma of its excellent cast. I know the humour of the film is supposed to draw attention to the fact that he's rebelling against very little except post modernist youth apathy but that is not an inherently dramatic concept. The film also relies on references to Marxism and Bolshevist history that will be completely lost on the teen comedy Apatow audience that talented writer director Jacob Tierney is going for. The Trotsky is amusing and charming but rarely funny. A smilar film, Rushmore gets more laughs and is much less predictable. When the crazy Leon finally gets arrested and gets his fellow students to join his revolution, it happens for no reason at all. However, almost everyone shines, from the students to the adult antogonists. Barchel is a terrific, likeable and sincere lead and carries the film. Saul Rubinek plays Leon's disgruntled Jewish businessman Dad, Colm Feore is the slightly hard ass school principal, Michael Murphy is a Vietnam draft dodger radical who regains his ideals as Leon's attorney, and Genevieve Bujold makes a lovely return to film as the dictatorial school board chairwoman. And though their romance is not believable, the lovely Emily Hampshire plays Leon's older girlfriend who has the same name and age difference as Trotsky's wife. Thought set in my native Montreal, the film is shot on generic sets which do not capture the atmosphere of the city as well as recent films like Barney's Version or Monsieur Lazhar. However, I loved the very fresh rock soundtrack by Quebecois band Maljube and the title sequences which are hip versions of communist poster art of the Bolshevik period. Definely a charming time waster and worth a rental. But for all you ex-radical parents, it will not turn your kids into more socially engaged socialists, so don't get your hopes up.

Cast: Jay Baruchel, Saul Rubinek, Geneviève Bujold, Emily Hampshire, Colm Feore, Jessica Paré, Justin Bradley, Liane Balaban, David Julian Hirsh, Ricky Mabe, Michael Murphy, Anne-Marie Cadieux, Domini Blythe, Kaniehtiio Horn, Jesse Rath Director: Jacob Tierney Summary: Seventeen-year-old Leon Bronstein (Jay Baruchel) thinks he is the reincarnation of Russian October Revolution leader Leon Trotsky, thus staging a strike at his father's (Saul Rubinek) factory and then a student walkout at his new school. My Thoughts: "You cannot describe this film without using the word quirky. Had some odd character's and interesting story. Jay Baruchel, gives a great performance as Leon Bronstein. He is over the top and brilliant. I did feel like he seemed a bit old for the character who was suppose to be 17. He seemed much older for that age, but so did the character he was playing, so maybe it was why they chose an older looking actor? But even though the character seemed very smart, there were also moments you saw that he still had some growing up to do. Funny film, but not sure if it will be to every-one's liking."

Wacky, yes. Funny, yes. Serious, yes. Quirky love, yes. My kind of film, yes. Jay Baruchel does his thing so well. Even Genevieve Bujold knows something is happening, and shows up for the film. Charming, fun, and wonderfully original.

"It's over. I'm not it. I'm not the man for the job." The Trotsky came out of absolutely nowhere. I don't even know how it appeared on my radar, but I'm glad that it did. It's quite the little gem. It's the story of a teenager (named Leon) from Montreal who believes he is the reincarnation of the Marxist leader Leon Trotsky, and believes that his life will follow that of his predecessor exactly. Right down to exile, relationships, and even cause of death. He finds his "great cause" in the plight of the students at the public high school that his father sends him too, and puts all his energy into forming a union for them. I found myself getting swept up into Leon's struggle against youth apathy very quickly, because he's such a likeable character. Jay Baruchel plays him with his typical neurotic performance, but it works. You don't know how seriously to take him at first, but Leon believes so deeply in who he claims to be and what he's doing, that it's easy to let your disbelief go and just roll with it all. All the characters are pretty great, actually, and most of my enjoyment of the movie came from their interactions with each other. So yeah, I'm recommending The Trotsky wholeheartedly. Don't immediately write it off if you have no idea who Leon Trotsky is. It's just a very likeable comedy, and it puts a fresh spin on the "high school movie". I enjoyed it.