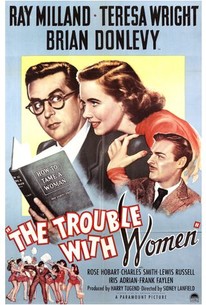 In this comedy, a scatter-brained professor nearly starts a riot when he writes a book claiming that women like to be treated roughly. A paper publishes snippets from the book and later the professor, feeling he was misquoted, begins suing for libel. The paper then sends out a female reporter to dredge up some dirt on the sexist academic. Not only does she do her job and prevent the suit, she and the professor end up falling in love. ~ Sandra Brennan, Rovi

Iris Adrian
as Rita La May

Will Wright
as Commissioner

Critic Reviews for The Trouble with Women

Thin and predictable and only mildly amusing.

There are no featured reviews for The Trouble with Women at this time.

The Trouble with Women Quotes