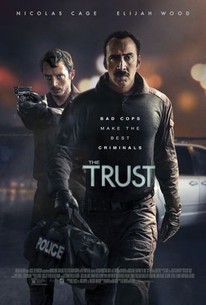 Critics Consensus: The Trust may not be an all-time heist classic, but its solidly workmanlike plot -- and the chemistry between Nicolas Cage and Elijah Wood -- should satisfy genre enthusiasts.

Critics Consensus: The Trust may not be an all-time heist classic, but its solidly workmanlike plot -- and the chemistry between Nicolas Cage and Elijah Wood -- should satisfy genre enthusiasts.

Critic Consensus: The Trust may not be an all-time heist classic, but its solidly workmanlike plot -- and the chemistry between Nicolas Cage and Elijah Wood -- should satisfy genre enthusiasts.

Waters and Stone are two nobody police officers working dull administrative jobs and making extra money selling stolen Civil Service Exams to other officers. When Stone hears a story about a heroin dealer quickly beating his extremely high bail, the two friends set into motion a plan to find the origin of such a large amount of cash. Through diligent police work they follow a trail that leads directly to a custom bank-style vault built into the back room freezer of a small grocery store. They put a plan into motion to rob the vault and split whatever they find inside. But by the time they figure out what the vault contains, it's already too late to turn back.

Sky Ferreira
as Nainen, The Woman

Jay Hieron
as Man in Armoire

Christie Beran
as Waitress at Diner

News & Interviews for The Trust

View All The Trust News

Critic Reviews for The Trust

The Trust is a heist movie that gives Nicolas Cage his juiciest performance since Kick-Ass and indulges some very kooky Cageian line readings.

There are foetuses that would be more convincing in the role of a jaded lawman than Wood. You can festoon him with hookers and drug paraphernalia - he still looks like a newly hatched baby bird.

Cage is on fine form in this slick little thriller.

Wood, a very long way removed from his Lord of the Rings glory days, is a womanising, drug-taking small timer, essentially decent but easily led astray by his friend. They're on the road to nowhere and that's where the film is headed too.

There's little in the way of tension, surprise or consistency, and the disappointing ending leaves questions about the point of the whole exercise.

Tune into its offbeat frequency ... and there is much to enjoy.

Man cannot live on Nicolas Cage alone, however - take him out of the proceedings and The Trust proves to be a by-the-numbers bank job with a disappointing conclusion.

There's an absence of any sort of genre or thematic cohesion, leading to a film littered with tonal fits and starts that come off as more or less random.

The Trust is perfect for those wishing to see two fantastic actors paired in delightfully quirky roles.

Cage returns to the Las Vegas he once famously left, joined by Elijah Wood for a simple but mostly effective heist flick.

buried away in this taut caper is a critique of the venality, corruption and greed that drives economic mobility in a country where police earn less than a casino busboy can get in tips, and where fortune smiles broadest on the ruthlessly larcenous.

The ending is a tad flat [but] there's fun to be had along the way, not least from the way Cage adds kooky flourishes to the narrative. 'I have an idea,' he says when inspiration strikes... 'It's kind of wacky.'

Audience Reviews for The Trust

Cage hasn't been so rewarding in a film project for quite some time. He has been stuck in the market of making films for a debt and sadly his career has taken a turn for the worst. Wood and Cage ignite an otherwise typical heist film and without them, this film would be relegated to VOD territory forever. The film has a wicked sense of humour and remains unpredictable until the the bitter end. The film is not without its flaws but it is a solid entry into the heist market that is quite overcrowded and glorified by Hollywood these days. The Brewers have substance and style which will serve their careers well for future projects. Cage should find more developing filmmakers for his wide variety of talents, he can really set the screen on fire when he gets going. 22/10/2018.

A splendid little film with a delightful soundtrack. Amazingly, I didn't hate Cage and Wood was more substantial than an elf. It's a bit quirky, but it's worth your while.

Ok caper flick with ok performances by Nicky Cage and Elijah Wood (who seems too small to be a cop, even in Vegas) although the ending is, uh, too quick and inconclusive. In fact the whole thing feels like that. Too quick. Inconclusive. But it's just okay after all is said and done, no more. That's all. You could miss it. No sweat.