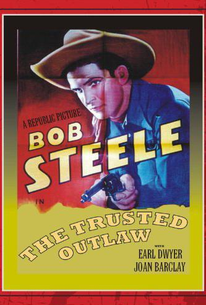 Though A.W. Hackel's Supreme Pictures went belly-up in 1936, he continued grinding out his popular Bob Steele westerns, shifting distribution to up-and-coming Republic. Steele plays Dan, the headstrong young son of a notorious outlaw. Dan is forced not only to live down his dad's reputation, but also his own, since it's been rumored that he has strayed to the wrong side of the law from time to time. He manages to prove that he's a good guy after all, but in a surprise development he doesn't win the film's official heroine Molly (Lois January), who has jilted him for another. Fortunately, second lead Betty (Joan Barclay) is there to pick up the pieces.

Oscar Gahan
as Mine Guard (uncredited)

Critic Reviews for The Trusted Outlaw

There are no critic reviews yet for The Trusted Outlaw. Keep checking Rotten Tomatoes for updates!

There are no featured reviews for The Trusted Outlaw at this time.