The Truth About Lies2017 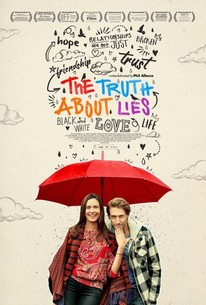 The Truth About Lies Videos

The Truth About Lies Photos

Gilby Smalls is having a meltdown. He's just been fired from his job, lost his apartment in a fire and his girlfriend gave him the boot so he's forced to move in with his booze-swindling man-obsessed mother. Life is bleak and as he's desperate to turn things around he meets his friend's beautiful sister who appears to be everything he ever wanted. Desperate to impress her, Gilby weaves a web of lies, one bigger than the next until he finds himself in too deep, when the truth proves to be too much to admit and even harder to accept.

Colleen Camp
as May

Carson Elrod
as Jack
View All

Critic Reviews for The Truth About Lies

Ineptly conceived and indifferently produced, The Truth About Lies aptly demonstrates why VOD is really the best platform for a certain category of indie features.

On a single day, the protagonist of "The Truth About Lies" is fired from his job, his apartment burns down and his girlfriend dumps him. He has it easy compared to anyone who actually watches this thoroughly unpleasant, unfunny comedy.

The truth is that this is a dreadful TV-like sitcom rom/com.

Unintentionally timely, thanks to its fibbing hero's similarities to America's most famous liar. Just not very funny.

Audience Reviews for The Truth About Lies

There are no featured audience reviews yet. Click the link below to see what others say about The Truth About Lies!

The Truth About Lies Quotes