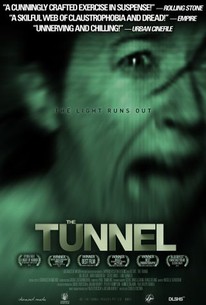 An investigative reporter leads a camera crew into a maze of tunnels beneath Sydney, Australia's St. James Train Station, and learns that the South Wales Government abandoned plans to tap an underground water reserve for a very good reason. When rumors begin to surface of a massive government cover-up, journalist Natasha Warner vows to uncover the truth about the derelict tunnel system. As Natasha and her team descend ever deeper into darkness, they soon realize they aren't the only ones in the tunnels. Now, one-by-one, people are disappearing. By the time the horrifying truth is uncovered, there may be no one left to tell the public of the terror that lurks just beneath the city streets.

Arianna Gursi
as Kate
View All

Critic Reviews for The Tunnel

I was pleasantly surprised by this movie mostly because it was kind of minimalist in ways that most found-footage - and I have seen most of them - simply are not.

Perhaps why The Tunnel is so effective is because it takes on a real world issue, crafting an interesting plot within that familiar story constructed as a news exposé.

When scary s--- happens, the terror sticks with you because you're never shown enough to be certain of anything.

[It] might sound like a mundane retread of recent creature features such as Creep or The Descent, but it manages to be something a bit more haunting in practice.

Not a bad effort for a mini-budgeted fan-funded horror project.

The audience is teased with fleeting glimpses of the threat lurking in the shadows and its first real appearance is played so well it is a thing of horror poetry.

It's not what you see - it's what you imagine that scares us in The Tunnel.

Audience Reviews for The Tunnel

"Okay, okay, now look, I can almost make out what we're doing here, so yer gonna have to shake the camera some more till I can't. Really shake it. And you, I need you to look down that dark hallway and ask the question "did you hear that" again, just a coupla more times. And you, I need more hysterical screaming again in places where nothing is going on to give the illusion that something might happen." --- the director of this stuff that's literally right outta the Blair Witch cold cereal box.

Decent things are done in The Tunnel for such a petty budget. It's a little bit Blair Witch Project and a whole lot Death Line. The concept of the film being a mockumentary rather than the standard "Found Footage" of Paranormal Activity 2, Cloverfield, The Last Exorcism etc. was an intriguing notion. It means that the underground shots (which are the film's focus) are interspersed with interviews and non-chronological footage. Though this struck me as a pleasant little flair of originality, it did sort of ruin the suspense that The Tunnel worked so hard on building up, continuously brining us back out of this terrifying world they created. I did come across more than a few people asking if there was any more information about the events of the film. They had indeed assumed that the whole thing was an actual documentary. The world is full of pretty stupid people, but kudos still goes to Enzo Tedeschi and Julian Harvey for an apparently believable script. Sticking to the tried and true method of "less is more", The Tunnel barely even gives us glimpses of what's going on. Though I suppose this leaves them with room to move in the future, as well as giving them a more believable angle and, let's be honest, less money spent on SFX. I did still end up feeling ultimately cheated by it all however. Then again, how can you be cheated by a movie you can own for free? While I'm on that, major damn props to Distracted Media and the crew behind The Tunnel for releasing it for free, and making it well known! It was a relatively inexpensive film to make, certainly, but it speaks for the team that they were happy to release their film to the public, caution to the wind, and hope it was just enjoyed. Which, all in all, it was. I have a bit of a soft spot for Australian Horror, and for POV Horror, so it hit the right buttons for me and gets some points off the bat, I'll admit, but it's still a solid little piece of film. And let's face it, you can own it FOR FREE! What's your excuse or not giving it a chance? Make up yo' own damn minds, shit... -Gimly

A weirdly terrible movie that tries to offer alot but delievers very little. Avoid if your not wanting to waste a couple of hours of your life.

Pretty decent movie but doesn't offer us anything new in the genre. As a horror it isn't that scary, as a thriller, not enough tension. It kind of skirts the lines between the two without being 100% successful at either.