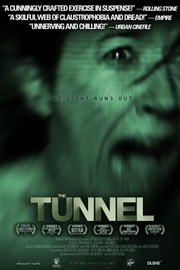 Riff J
January 9, 2019
Great concept (not original - maze of dark tunnels with an evil presence) but not executed well enough. Didn't like the direction. The acting was just ok (I know its super low budget but I've seen these types get better acting). There are only a few scares and they were pretty good. But most of the movie was building up to a climax that didn't pay off.

January 28, 2018
Well that was 90 minutes of intense Aussie horror that I wasn't expecting to be so good. If you're into Australian Horror movies like Saw, Wolf Creek, The Babadook etc then this is certainly worth the watch. Then again, for such a low budget movie (just $36,000 AUD), they've created something at the very least on par with the Hollywood horror movies out there. Worth a watch either way.

Stephanie L
June 18, 2017
This movie may not be the greatest but it's a lot better than the garbage Hollywood has been throwing at us. It has a great creepy atmosphere and the characters don't follow the standard movie trope of 'were in danger, let's split up' . It's also good to see a movie that doesn't rely on tons of blood and gore to get scares and instead gives us a creature without an origin simply hunting for prey. I would love a sequel to explore this further.

Siobhan S
½ January 3, 2017
Nope nope nope. This was immensely disappointing. Can they make a movie for once that doesn't have antagonistic protagonists that are shouting at each other every five seconds. It really sucks the atmosphere out of the movie. The "Thing" was interesting but Jesus wept was this a snore fest.

For fans of found-footage films, it may be worth a watch if you've seen all the rest. Then again, if you've seen the rest you won't find anything new in this.

The documentary style definitely gives more credence as to why someone would keep filming when being chased down a dark tunnel, but the shakiness and horror tropes will give you the sense of dĂ©jĂ  vu.

C b
October 17, 2016
A group of four journalists venture down in to abandoned train tunnels under the streets of Sydney only to lose themselves and each other to the horror that resides in the shadows beneath.

With the success of camcorder films such as Open Water, The Blair Witch Project and Paranormal Activity, it's no surprise that we've been inundated with a slew of similar, camcorder low-budget features. Sadly very few replicate the success of the movies mentioned. Carlo Ledesma attempts to recreate the fear similar to that of The Descent (2005) in this documentary style, economical feature except it falls short. The style and attempt are both admirable but like Chernobyl Diaries (2011) the movie beings to get tedious as the characters are chased by creatures you never really see.

The unrecognisable cast offer a decent effort and while Ledesma's attempt is valiant, it isn't enough to save The Tunnel and transform in to a movie worth watching. This is really one to miss.

Chris S
August 21, 2016
Some very creepy moments. The monster is especially scary as you couldn't quite make it out.

Guilherme N
½ July 14, 2016
A very bad movie about very bad and uninteresting journalists. And, no, a mediocre documentary can't do a good movie.

Héliř L
½ February 3, 2016
Challenging current distribution models and taking advantage of the found-footage horror movie fever, The Tunnel is a perfect date movie because it won't cost you a thing and it's likely to make you jump and brace up to the person sitting/laying down next to you. While it's another Australian mockumentary filled with cliches and stereotypes it does really boil if you have the patience to endure all the simmering. Watch if you're poor and wanna Netflix and chill without having to sign up for anything.

Super Reviewer
Kevin M. W
½ December 17, 2015
"Okay, okay, now look, I can almost make out what we're doing here, so yer gonna have to shake the camera some more till I can't. Really shake it. And you, I need you to look down that dark hallway and ask the question "did you hear that" again, just a coupla more times. And you, I need more hysterical screaming again in places where nothing is going on to give the illusion that something might happen." --- the director of this stuff that's literally right outta the Blair Witch cold cereal box.

Jon C
½ October 27, 2015
another super-effective found footage horror flick that utilizes its gimmick to great, desired success
it's almost up there with 'Quarantine' and 'Grave Encounters' giving some clever scares and a feeling of semi-realism
the Australian journalist team ventures into the underground tunnel system for a story but recorded their own nightmarish story in the process
some kind of supernatural force has them trapped, going in circles, gouging their eyes out, and following them around every dark corner
the less you see the better which rarely works in this genre of filmmaking leaving the imagination the scariest thing that exists
you'll definitely feel like you're trapped underneath with these people hoping to see the light never go out

Laura M
½ May 21, 2015
For what it was, it was decent. The biggest problem with this genre and this movie are night vision cameras. I know they do it to likely save money on effects, but you can't tell what's happening sometimes and it makes for pockets of boring and kind of loses the atmosphere

David C
½ April 26, 2015
I really liked the story set up in this film and the transition back and forth from mockumentary to found footage, but as good as the music was, it really annyoed me it keep playing through the film, and the character's motivations and behaviour seemed really out of wack with the reality the show was aiming for. I also hated the last act. IIt made me want to stand up and walk out.

David M
April 20, 2015
Journalists descend into the Closed off Australian tunnel system in oder to investigate an apparent government coverup and the disappearance of homeless people who were living in the tunnels. This is a horror/suspense style movie done in a combination of found footage style and (fake) documentary.

I thought it was good overall however I strongly feel that the movie would have been better done traditionally rather than as found footage/documentary. Also I found the first 1/3 or so of the movie to be somewhat boring and uneventful. I know the goal was to build up the characters but I feel that should have been done in the first ten minutes rather than the first 30 minutes.

As for the story I felt it was lacking a little. Everything was well done but I would have preferred some sort of twist or unexpected surprise at the end. I would have like to hear more about the story behind the "monster" present and that sort of thing.

Bottomline: Decent film if you like found footage/documentary style horror/suspense. If you find yourself too bored during the first 30 minutes maybe fast forward as it does get a bit better. Don't watch this movie expecting an intriguing story because you won't find it, ironically.

Jen H
April 10, 2015
Not very good. Vaguely ripping off other better movies, like The Descent, Blair Witch Project and REC.

Radia J
March 21, 2015
One of the best horrors for a sleepover if you want to get real scared.

Super Reviewer
Gimly M
½ March 9, 2015
Decent things are done in The Tunnel for such a petty budget.

It's a little bit Blair Witch Project and a whole lot Death Line.

The concept of the film being a mockumentary rather than the standard "Found Footage" of Paranormal Activity 2, Cloverfield, The Last Exorcism etc. was an intriguing notion. It means that the underground shots (which are the film's focus) are interspersed with interviews and non-chronological footage. Though this struck me as a pleasant little flair of originality, it did sort of ruin the suspense that The Tunnel worked so hard on building up, continuously brining us back out of this terrifying world they created.

I did come across more than a few people asking if there was any more information about the events of the film. They had indeed assumed that the whole thing was an actual documentary. The world is full of pretty stupid people, but kudos still goes to Enzo Tedeschi and Julian Harvey for an apparently believable script.

Sticking to the tried and true method of "less is more", The Tunnel barely even gives us glimpses of what's going on. Though I suppose this leaves them with room to move in the future, as well as giving them a more believable angle and, let's be honest, less money spent on SFX. I did still end up feeling ultimately cheated by it all however. Then again, how can you be cheated by a movie you can own for free?

While I'm on that, major damn props to Distracted Media and the crew behind The Tunnel for releasing it for free, and making it well known! It was a relatively inexpensive film to make, certainly, but it speaks for the team that they were happy to release their film to the public, caution to the wind, and hope it was just enjoyed.

Which, all in all, it was. I have a bit of a soft spot for Australian Horror, and for POV Horror, so it hit the right buttons for me and gets some points off the bat, I'll admit, but it's still a solid little piece of film. And let's face it, you can own it FOR FREE! What's your excuse or not giving it a chance? Make up yo' own damn minds, shit...

Chris D
December 19, 2014
I love a slow build......the wick is lit and this scary candle burns superbly for 80 minutes. The acting is greater than you'd expect form a "genre" or B-Movie (which many may think it is). When the SCREAM guy calls you and asks "What's your favourite scary movie?", this may well be your answer.
Page 1 of 12