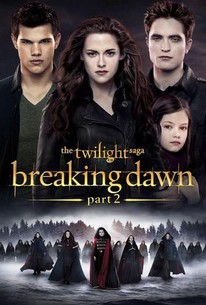 Critics Consensus: It's the most entertaining Twilight, but that's not enough to make Breaking Dawn Part 2 worth watching for filmgoers who don't already count themselves among the franchise converts.

Critics Consensus: It's the most entertaining Twilight, but that's not enough to make Breaking Dawn Part 2 worth watching for filmgoers who don't already count themselves among the franchise converts.

Critic Consensus: It's the most entertaining Twilight, but that's not enough to make Breaking Dawn Part 2 worth watching for filmgoers who don't already count themselves among the franchise converts.

The astonishing conclusion to the series, The Twilight Saga: Breaking Dawn, Part 2, illuminates the secrets and mysteries of this spellbinding romantic epic that has entranced millions. -- (C) Official Site

Swo Wo Gabriel
as Young Quileute

The 10 Most Unintentionally Unsexy Sex Scenes in the Movies
Digital Multiplex: The Master, The Twilight Saga: Breaking Dawn Part 2, and More
RT on DVD & Blu-Ray: Twilight Ends and The Master Mesmerizes

A feast of ripe dialogue and bloodsucking action.

The fifth and final entry in the historically successful "Twilight" franchise is the most self-aware and in some ways the most entertaining.

If anything, this series has gotten dumber and more inert as it has progressed, with this last one finally reaching over into an extended wallow in camp.

You're going to hear a lot about Breaking Dawn Part 2 being the best of the Twilight movies. That's like saying a simple head cold is preferable to swine flu.

The 'Twilight Saga' has no upmarket aspirations. Seeking neither critical applause or peer-review awards, these movies, like those of Tyler Perry, seek only to provide unabashed satisfaction to those who believe in their characters.

Finally we come to the nadir of the saga. Filmed back to back with the first part, [this film] is built around the ... boring premise ... of gathering forces[.]

I will give credit where credit is due: there are some genuinely enjoyable (see: hilarious) moments sprinkled throughout this all together way-too-long fantasy romance.

It has moments that will entertain even the most ardent hold-outs - mainly Michael Sheen related - but it ends as it started, a franchise for fans and no-one else.

The first half-hour is so blanketed by one-liner riffs that it's difficult to understand the intent.

Kristen Stewart clearly embraces the ability to set aside mopey goth Bella in favor of the more alive but undead Bella.

So here it is. The second half of a needlessly long last goodbye.

I'm surprised that this final chapter does have something to say after many movies about nothing, but while things do happen for a change and the climax is urgent and exciting, we are hit by a ridiculous twist that makes it collapse entirely to the ground. At least it is finally over.

Bella awakens to her new life as a vampire, her eyes now glowing red and her complexion pale and delicate. She picks up things she has never noticed before, her senses alive and super charged for the first time. Her vision has pinpoint accuracy, her hearing detects the tiniest sounds and her agility is now superhuman. She runs off into the forest with Edward to experience her new vampiric abilities. As she sprints through the trees at top speed, she sees nature in all its beauty, like never before with her new vampire vision. Everything can be seen in slow motion, the insects flying, the flowers blooming, she can hear various small wildlife buzzing, clicking and calling. Yes, nature and its creatures seen and heard for the first time perfectly in all their glory, beauty, majesty...and then she rips out its throat. The big finale to the epic 'Twilight' series finally dawns (hehe) upon us, the limp tale continues from where it left off. Unfortunately this means we go straight back into the vampire soap opera we had to put up with in the last deary instalment. Its not as bad as the last film in that sense, at least this time we have 'Bella' getting used to her new vampire skills and scowling EVEN more than normal. On the down side we still have Jacob sexually frustrated because he can't do it doggy style with Bella and lots of average young actors with lots of poorly done heavy face makeup. The effects are still pretty damn ropy all the way through, the CGI is near laughable in most sequences with terrible special vampire skill sequences of super speed. The wolves look like cartoons and characters look like ragdolls when knocked about in the air or where ever. Worst new effect must be the new born child, was that thing CGI? it bloody looked like it. Jesus that looked eerie, I think it was either a fully CGI baby or a real baby with a CGI face! good god!, no wonder everyone thought it was evil. The plot on the whole is much more interesting than the last film, overall this film is better than the last as that was terrible. Its all just a prolonged build up to the big fight at the end, but even that isn't entirely as it seems. Anyway the fight has been talked about a lot but frankly I don't see why. Sure its probably the best thing in the entire franchise but its hardly worth waiting for. Plenty of heads being ripped off and arms torn from their sockets whilst vampires and wolves go down in a flurry of sparkly action, but in no way is any of it original or really exciting. I thought the whole bit about gathering vampire friends from around the world quite amusing, basically a recruitment montage. Its fun but highly generic and cliched, the amazonian female vampires in their tribal outfits, never thought Egypt would have vampires, one bloke from the American Revolution period who doesn't shut up about it (you'd think he would have let that go after a few hundred years) and the hilariously cliched Irish vampires complete with flatcaps, scarfs and dowdy, drab clothes that looked like poor labourers. I've said before this franchise isn't as bad as many say and I will still stand by that. The first film was OK, second was fair and third was a bit better than them both, best not to talk of the pointless fourth. Yes the film is still chock full of sulky looking younglings, cheesy ass panto style makeup, lots of brooding, lots of dialog about things only the book readers will know of (or if you can remember from the last films, I couldn't), characters that pop up outta nowhere (I lost track), vampires that look and dress like pupils from 'Hogwarts' and of course Miss Stewart doing her best grimacing/pouting ever! As you can guess the fans will love and probably mums with their daughters too. The franchise was always just an excuse for mums/daughters/teen girls to see some fit firm young men in very very soft acceptable porn, tastefully done of course. I'm sure its close to the source material and it has been good in places but it is a weak romantic tale really, drawn out over five films. And what is the deal with Jacob? the dude isn't romantically involved with Bella anymore, but he still wants it doesn't he, doesn't he? Bella still keeps him around why? for threesomes? just to look at his nice body? to abuse him? He gets a raw deal if you ask me, he gets to babysit their kid and generally be a dogsbody forever whilst watching Bella and Edward get it on. Maybe he likes that? This final episode is like the first three, its average and just about kept my attention although the originality of the original is of course long gone. A nice end credits sequence ties everything up in a sweet lovable girly bow, but will we see more of this supernatural heartbreaker? or is it indeed finished...forever?

Disappointing ending as predicted which Bill Condon can't return the magic and the charm that the first Twilight had.. And the battle was a little nonsense since it didn't actually happen, maybe Meyer's the one to blame about this. But the developing story of Renee is also ridiculous.. But overall, I'm just glad that this movie finally meets its ending..

Bill Condon's The Twilight Saga: Breaking Dawn Part 2 is a mediocre end to a mediocre series.

100 minutes may seem like a brief run time for a story of this caliber, but it definitely feels longer. Supposedly, the first 75% of the film serves as a buildup for the massive finale, but it turns out to be tedious and uneventful. Then the finale comes and it is a tad underwhelming.

The violence is toned down brutality with no blood in sight, while the CG is passable. There is a bunch of it in the finale, but epic the battle is not.

For the most part Kristen Stewart and Robert Pattinson are stale and monotone. Taylor Lautner is a little better. Ashley Green and Martin Sheen are the lives of the party, but they can only do so much.