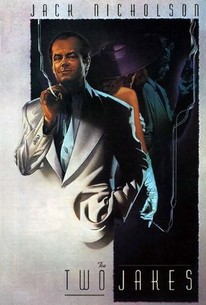 The Two Jakes, Jack Nicholson's sequel to Roman Polanski's Chinatown, picks up 10 years after its predecessor, finding Jake Gittes (Nicholson) still mourning the death of Katherine Mulwray. Gittes becomes involved in another complicated case in The Two Jakes, with oil replacing water as the coveted natural resource. Jake becomes embroiled in a complex real estate scam through another man named Jake (Harvey Keitel), who believes that his wife (Jennifer Tilly) is cheating on him. Like Chinatown, this simple task unlocks to reveal an impossibly convoluted--but logical--plot.

Dean Hill
as Cop with Parrot

Critic Reviews for The Two Jakes

It is a fundamentally strong story, though it lacks the ingenious nuances and twists of Towne's earlier effort.

As a thriller, The Two Jakes proves impossible to follow; as an exercise in retro style, it glows with sullen beauty. Forties suits, ties, two-tone shoes: everything is in place, bathed in hard-edged gloom.

It has, finally the air of a project that was made out of a sense of obligation rather than a drive to entertain, to amaze.

The Two Jakes allows Nicholson to reprise one of his most memorable characters as a way of seeing whether he's still got it.

It's not a thriller and it's not a whodunit, although it contains thriller elements and at the end we do find out whodunit. It's an exquisite short story about a mood, and a time, and a couple of guys who are blind-sided by love.

The verve, dramatic propulsion and sense of evil that informed Polanski's Chinatown are largely missing from The Two Jakes. But it is, for all its murkiness, an intelligent, enjoyable noir thriller.

This snail-paced, convoluted excuse for crime drama is a pathetic way for the highly revered Jake Gittes to fade away.

Nicholson's turn as Gittes is enjoyable, but it never quite feels like the same man from Chinatown. Yet The Two Jakes is admirably dense in a manner that's satisfying rather than frustrating.

The Two Jakes is the best Chinatown sequel anyone could reasonably expect, and it's very much worth a look.

Points out that we may think we're done with the past but it almost never is done with us.

Of course it's no "Chinatown," but it is satisfyingly moody and atmospheric.

Audience Reviews for The Two Jakes

The long awaited sequel to Chinatown continues the story of Jake Gittes as he investigates the seedy underbelly of L.A. in The Two Jakes. This time Jake is caught up in a murder case when his client kills a man that's sleeping with his wife, but evidence soon comes to light that suggests that it was less of a crime of passion and more of an elaborate trap. Jack Nicholson, Harvey Keitel, Madeleine Stowe, and Meg Tilly form and especially strong cast, and give great performances. The characters and the mystery are quite compelling, but the plot's overly convoluted and detracts from the rest of the film. While The Two Jakes has its flaws, it still delivers a smart and stylistic film-noir that's captivating and provocative.

For an unnecessary sequel, The Two Jakes is pretty amazing. It really kept the style of the first film and really built on the characters in the first. You could clearly see how much Jack Nicholson cared about the film and his devotion to Polanskiâ€™s filming style. However, this is very much a late 40s approach to Film Noir. You have the start of the baby booming age and the rise of suburbia. Itâ€™s a very interesting look at the dying genre and is in no way a cheap knock off of the original. Even the lighting and film quality looks the same, which is probably my favorite aspect of the film making from Chinatown. Jack Nicholson really makes a great return as Jake Gittes. He is even more apathetic and cynical than before. You can see the 10 years between films both physically and mentally. Heâ€™s still one of the best screen characters of American Cinema and you canâ€™t help but fall in love with him all over again. I liked how he still was being haunted by Mulray and never quite got over the events that happened in Chinatown. The plot was actually just as clever as the first film and certainly holds itâ€™s own. It doesnâ€™t exactly play like a sequel because there was completely new case with different good guys and bad guys. A lot of scenes run similar to the original, but theyâ€™re mostly small little homages that occur pretty flawlessly. You can tell this was a nostalgia project, but itâ€™s one of the best. It reminds me a lot of The Color Of Money, in no way does it compete with the original, but it is incredibly fun none the less.

Jack Nicholson revives the Jake Gittes myth in this minor but decent follow up to the legendary Chinatown. it keeps the twists and intricate schemes of the first. but the romantic, unnerving and disturbing touch is lost.

An incredibly disappointing sequel to Chinatown.