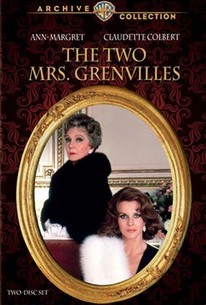 Claudette Colbert made her first screen appearance in 25 years in the 2-part TV movie The Two Mrs. Grenvilles. The story involves social-climbing actress (read: "chorus girl") Ann-Margret, who marries American-aristocrat naval ensign Stephen Collins, the son of Ms. Colbert (the two female stars, you see, are the "two Mrs. Grenvilles"). Try as she might, Ann-Margret can neither assimilate herself to her husband's lifestyle, nor overcome the animosity of her mother-in-law. Collins starts cheating on his new wife....and before long, Ann-Margret is standing trial for the fatal shooting of her husband. Marvin Hamlisch wrote the music for the sumptuously stylish The Two Mrs. Grenvilles, which was based on novelist Dominick Dunne's a clef rehashing of the 1955 murder of Long Island millionaire William Woodward Jr.

Sian Phillips
as Duchess of Windsor

There are no critic reviews yet for The Two Mrs. Grenvilles. Keep checking Rotten Tomatoes for updates!

For fans of the lead actresses this is a treat, for others a passable entertainment. Claudette closes out her career here in style, she and Ann-Margret both perform like the pros they are and are surrounded by both capable co-stars and plush settings.