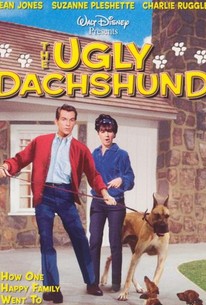 Dean Jones and Suzanne Pleshette star in this Walt Disney family comedy as Mark and Fran Garrison, a dog-loving couple with different tastes in canines. When their dachshund gives birth to puppies, kindly veterinarian Dr. Pruitt (Charlie Ruggles) convinces Mark to take a Great Dane puppy home with him. The Great Dane, named Brutus, grows up with the tiny pups convinced that he's also a dachshund. Brutus's confused identity sets the stage for a number of mildly comic bits -- he chases policemen up trees, destroys Mark's studio, and ruins a garden party. Fran finally tells Mark that Brutus has to go, but changes her tune when Brutus saves Fran's favorite dachshund puppy, Chloe, from a scrap heap. When Fran announces that she is entering Chloe in a dog show, Mark secretly enters Brutus in the same contest in an effort to convince Brutus to think like a Great Dane.

Critic Reviews for The Ugly Dachshund

Audience Reviews for The Ugly Dachshund

The Ugly Dachshund is good old-fashioned clean sterilized (separate beds and all) Disney fun. Hokey story you can't quite bring yourself to care about complete with Suzanne Pleshette's (character's, at least) neurotic OCD and second guessing nature with some classic racial stereotypes make The Ugly Dachshund a piece of a yesteryear I think its safe to say never existed. Admittedly, this movie is probably fun for dog lovers (and possibly the only reason I actually kind of enjoyed it) but watching a Great Dane get sprayed in the face with a tube of oil paint is the mark of a movie made before a representative from the Humane Society was legally obligated to be on set. If you get to see The Ugly Dachshund on DVD I strongly recommend the nonsensical extras. Namely the featurette on Mako where he carries on like he's filming an episode of Inside the Actor's Studio. Guy gets nominated for a Best Supporting Actor Oscar and all of the sudden he's Walter Fucking Brennan. You know who else got nominated for an Oscar? Courtney Love. Don't feel so special now, do you Mako?