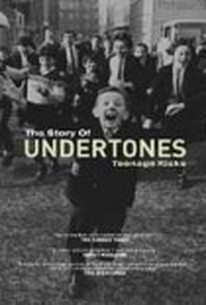 Hailing from the town of Derry in Northern Ireland, the Undertones were a rare item among the bands that burst into prominence in the punk rock explosion of the mid-'70s. Less interested in fashion, anarchy, or politics than in the heady joys of a great pop song, they fused irresistible, hooky tunes with the fierce passion of teenage rock & roll believers, and came up with a handful of instant classics such as "Teenage Kicks," "My Perfect Cousin," "Here Comes the Summer," "Jimmy Jimmy," "It's Going to Happen," and many more. Legendary British disc jockey John Peel has often cited "Teenage Kicks" as his favorite song of all time, and in the documentary Teenage Kicks: The Story of the Undertones, Peel travels to Derry with a camera crew to trace the history of the band, while also offering a look at the city that gave the band a home and kept them grounded in the midst of international recognition. The film includes extensive performance footage of the band in its prime, as well as recent interviews with former members. ~ Mark Deming, Rovi