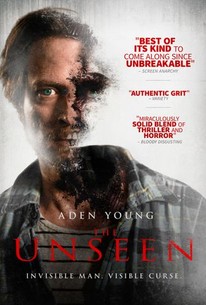 The Unseen is the story of Bob Langmore (Aden Young), who eight years earlier, abruptly left his wife Darlene (Camille Sullivan) and their daughter Eva (Julia Sarah Stone) behind, only to isolate himself in a small northern town. Bob made this sacrifice because he has a condition: he is becoming invisible. Not in the clean "Invisible Man" sort of way, but in an irregular, random and gradual complete loss of pigment in his skin. When Darlene reaches out to him, he returns to the city for one last chance to reconnect with his daughter, but when she goes missing, he will risk everything to find her, including exposing the secret that he is becoming invisible.

Critic Reviews for The Unseen

A nicely crafted if not entirely satisfying drama of a man struggling to retain any connection to human society.

... an interesting take on the invisible man trope, showing a new way for the invisibility to take hold as well as a new source for it.

The Unseen, despite its slightly long running time, makes a noble attempt to meld family drama, classic science fiction and realism into a quite engaging film. See it for the great performances and the cool special effects.

Geoff Redknap has crafted a solid family drama with a dash of science-fiction. While the film does have plot and pacing issues, The Unseen excels in its use of atmosphere and its seamless blend of practical and CGI special effects.

It's a busy plot, but Redknap bides his time before carefully drawing all the threads together.

The Unseen isn't really a horror movie at all. It's something else, and I really appreciated that.

Taken as a horror movie.

The Unseen turns a freakshow scenario into jarring parental heartbreak as only genre cinema could permit.

The Unseen may take its time, but it's definitely worth it. It delivers a new approach to a classic story with an unexpected emotional impact that lingers, and it is well worth seeking out.

Audience Reviews for The Unseen

There are no featured audience reviews yet. Click the link below to see what others say about The Unseen!