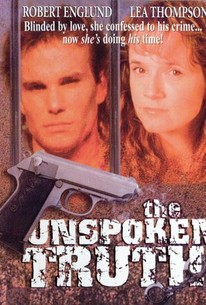 Made for television, The Unspoken Truth is the factual story of Brianne Hawkins (Lea Thompson), who after enduring a lifetime of abuse at the hands of her family marries the even more abusive Clay Hawkins (James Marshall). Given to beating his wife at the slightest provocation, Clay finally goes completely over the edge when he shoots and kills a man who had the temerity to speak to Brianne without Clay's permission. Thinking quickly for a change, Clay persuades Brianne to take the rap for the killing, whereupon she complicity (if not willingly) concocts an elaborate story as to how she shot the man accidentally. Not only do the authorities refuse to swallow this fabrication, but they end up sending both Clay and Brianne to prison for life! Only when the future of her daughter, Lily (Karis Paige Bryant), is jeopardized does the long-suffering Brianne finally work up the courage to fight for her freedom and her long-denied fundamental rights as a human being. A shocking mid-film revelation elevates this story from the usual battered-wife TV-movie syndrome. Filmed on location in Austin, TX, The Unspoken Truth originally aired September 24, 1995, on NBC.

Mark Walters
as Off. Brock

Greta Muller
as Patsy
View All

Critic Reviews for The Unspoken Truth

There are no critic reviews yet for The Unspoken Truth. Keep checking Rotten Tomatoes for updates!

There are no featured reviews for The Unspoken Truth at this time.