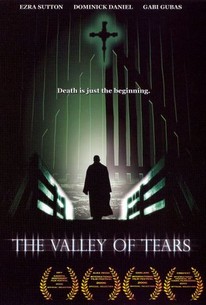 The Valley of Tears Photos

A dying man wages a valiant battle to better his own life by altering the fate of the man responsible for murdering him in this supernatural thriller from director Peter Engert. Adam (Ezra Sutton) is on the verge of death. The man who put him there is his former friend Lock. But is it too late for Adam to prevent his own grim fate and save Lock from straying down the path of eternal damnation? As Adam begins to slip away, he has a vision in which God implores him to save his own life by getting Lock to repent for his sins. But there's a catch: while Adam will be able to see everything unfolding around him during his journey, he won't be able to hear or communicate with anyone directly. Realizing that his only hope of succeeding is to get to Lock emotionally, Adam attempts to steer his old friend in the direction of the girl with whom he once fathered a child. Meanwhile, Adam watches in pain as his grieving wife Eva (Gabi Gubas) and young daughter Emily do their best to carry on without him. Later, when Lock decides to kill Adam's family, Adam enters into a supernatural struggle of epic proportions as his ex-partner David reveals his true feelings for Eva. Could it be that in life Adam was no better than Lock? Over the course of his conversations with God, Adam begins to realize things about his life that he never knew during his time on Earth.

Critic Reviews for The Valley of Tears

There are no critic reviews yet for The Valley of Tears. Keep checking Rotten Tomatoes for updates!

There are no featured reviews for The Valley of Tears at this time.

The Valley of Tears Quotes