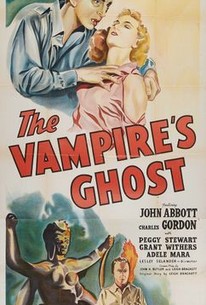 It is altogether typical of Republic Pictures that the studio's 1945 horror effort The Vampire's Ghost was interrupted mid-film by a barroom brawl! Set in a coastal African village, the story concerns one Webb Fallon (John Abbott), an unprepossessing sort who holds the region in thrall because of his vampiric tendencies. Fallon attempts to exercise his influence over a local plantation owner, and almost succeeds-until the hand of God, in the form of an intellectual priest (Grant Withers), intervenes. Republic stalwart Peggy Stewart and newcomer Charles Gordon handle the romantic subplot. Vampire's Ghost was the first screenwriting effort by Leigh Brackett, who went on to somewhat loftier projects like The Big Sleep and Rio Bravo.

Frank Jaquet
as The Doctor

Jimmy Aubrey
as The Bum

Fred Howard
as Sailor
View All

Critic Reviews for The Vampire's Ghost

While The Vampire's Ghost is of course tame by today's standards, it retains its unusual atmosphere, thanks to the novelty of setting a vampire flick largely in a jungle setting.

Audience Reviews for The Vampire's Ghost

There are no featured audience reviews yet. Click the link below to see what others say about The Vampire's Ghost!