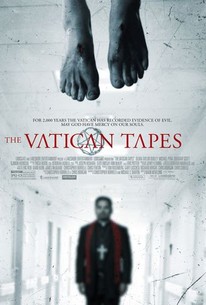 Critics Consensus: A loud, rote exorcism thriller that presents nothing new to an already overpopulated subgenre.

Critics Consensus: A loud, rote exorcism thriller that presents nothing new to an already overpopulated subgenre.

Critic Consensus: A loud, rote exorcism thriller that presents nothing new to an already overpopulated subgenre.

THE VATICAN TAPES follows the ultimate battle between good and evil- God versus Satan. Angela Holmes is ordinary 27-year- old until she begins to have a devastating effect on anyone close, causing serious injury and death. Holmes is examined and possession is suspected, but when the Vatican is called upon to exorcise the demon, the possession proves to be an ancient satanic force more powerful than ever imagined. It's all up to Father Lozano (MICHAEL PEÑA) to wage war for more than just Angela's soul, but for the world as we know it. (C) Lionsgate

Will C. Brown
as Hospital Patient

Critic Reviews for The Vatican Tapes

this hodgepodge of exorcism and possession clichés... flirt[s] uncomfortably with justifying clerical abuses as just a part of the Church's endless battle against Satan.

A routine regurgitation of demonology's familiar myths and legends: needless to say, possession is nine tenths of the lore.

In terms of characterisation and plotting, the film is utterly absurd, but taken as a fairground ride for the ghoulishly inclined, it just about passes muster.

The Vatican Tapes has presumably been released with Hallowe'en scares in mind, but the movie only induces hilarity, with some of the daftest exorcism scenes you'll see.

Everyone is working from diabolically thin material: concerned dad Dougray Scott utters a dozen variants of "I don't understand this!"

Just as it seemed like the exorcism subgenre was on the verge of a renaissance after The Conjuring, here is the cold shower we've secretly been afraid of all this time.

The Vatican Tapes isn't exactly ground-breaking... but it's a solid, well-written, well-performed, and surprisingly original addition to the over-populated parnanomal/demonic possession/exorcism-themed pantheon.

Some of the special effects are cool, but they don't compensate for the surrounding lack of drive.

If you can manage to keep yourself awake throughout the whole thing then you deserve a medal.

Here is a prime slice of the juiciest ham just in time for Halloween.

The Vatican Tapes is a feeble Exorcist-style film that includes levitation but never lift-off.

Audience Reviews for The Vatican Tapes

A little creepy, but not all that scary, The Vatican Tapes is a stereotypical demon possession film. When a young woman becomes possessed a priest gets permission to perform an exorcism, but it's soon revealed that they're not dealing with an ordinary demon. Olivia Dudley and Michael Peña lead the cast and give solid performances. And, the possession is fairly well-done, delivering all the standard fare; body twisting, shaking objects, prayers in Latin, etc. But the plot is paper thin with little character developed, and it gets batshit crazy at the end. For those who enjoy supernatural thrillers The Vatican Tapes will do, but there's nothing original or compelling about it.

While I understand the reasoning behind demonic possession/exorcism films, it's interesting and easy to promote, but, creatively, none of these exorcism films have ever managed to come close to the best film in that genre. That film, obviously, being The Exorcist. It's been FORTY-TWO years since The Exorcist came and yet no film since then has ever even come remotely close to that. I understand why people keep trying, but the comparisons among film geeks will always be there and it'll always end up favoring The Exorcist, because it's a much better film in every way, shape or form. The only film, that I can honestly say, comes within half of The Exorcist's greatness would be The Exorcism of Emily Rose. I wouldn't call the latter a great film, it's good at best, but it does the best job at portraying a fairly exciting, and terrifying to some, exorcism. With that said, this movie isn't as horrible as one might have expected from reading the reviews. I don't mean to suggest that this is a good film, or even an average one, but it does a better job than one would imagine. I think a lot of that, honestly, has to do with Olivia Dudley's commitment to the role. Olivia isn't exactly a high-profile actress, at the moment, but I think she does a really solid job with what is, essentially, every exorcism film you've ever seen. Honestly, the film's scripting is a little goofy and silly, to the point where it's actually laughable in some scenes. I think that's part of the reason I didn't hate this film as much. I realize that some of this stuff is very real to some people, but the film has such a self-serious tone that it ends up being comical in a lot of scenes. So that makes the film a little more tolerable, honestly. If you think this movie is terrible, which it probably is if broken down, then at least you can get some chuckles out of it. I will say that the climactic exorcism is actually fairly decent, all things considered. I think it does a good enough job. I do think that it gets a little goofy as the exorcism progresses. Like it escalates accordingly, but it all ends up feeling a bit silly by the end. I mean the ending definitely seems to set up a sequel, that I doubt we'll ever get, due to this film not being exactly successful, but I thought the ending was solid and it fit within the context of the story the film was trying to tell. It wasn't out of left field, like the ending to The Last Exorcism, which was horrendous. I wouldn't call this a good film, in the least, it's below average at best, but it surpasses expectations thanks to a committed performance from Olivia Dudley and its self-serious tone leads to some laughs at its expense. I wouldn't exactly recommend it, but you can certainly watch worse films. I realize that that's not a glowing recommendation, but if you've got a free movie rental from Redbox and you've seen every film they have, then you can use it on this and you won't be too pissed off. Slightly below average, but nothing that you ever really need to see.