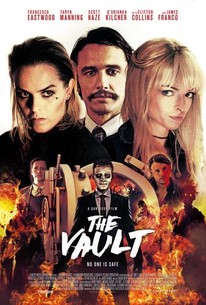 Two estranged sisters are forced to rob a bank in order to save their brother. The heist begins smoothly, but mayhem ensues when the defiant bank manager sends them to a basement-level vault--home to something truly evil.

Critic Reviews for The Vault

Though it could do with being weirder and wilder, this high-concept mash-up - what if crooks robbed a haunted bank? - features fine work from a brace of rising stars.

There's little to like in this undercooked "horror" about three siblings who stage a bank heist and run into trouble when they encounter a haunted vault.

There's a reasonable premise to this horror-thriller, but also something straight-to-rental about the look and feel of the whole thing.

The heist bit is quite smartly handled, with James Franco rocking a natty moustache-and-mullet combo as a bank employee and Taryn Manning... impressively obstreperous as one of the robbers. The horror part, however, is dreadfully underpowered.

Just doesn't stand up against the stack of intelligent indie horror films being released today.

Ultimately, The Vault isn't silly enough to be horrendously memorable or tense enough to be effective as the genre exercise it could have been. It falls into that underdeveloped gap in the middle.

Extremely predictable... there is something that happens that it just gives it everything away very easily.

Even when the plot finds itself predictable at times, and not quite jump-out-of-your-seat horrifying, it's still a solid thriller.

Not much makes sense in this haphazardly plotted dud.

Ultimately, the film is not frightening enough to keep you up at night, nor ingenious enough to make you wonder about the twist - and not even bad enough to make it good.

Cristina Radulescu
One Room With A View

The Vault is a strange but successful mixture, a heist thriller-turned-horror movie.

Audience Reviews for The Vault

I love the idea of these flip-the-script horrors, the kind that play on some variation of the "The Hunter Becomes The Hunted" trope. Unfortunately, The Vault is not a prime example of this concept when we're speaking in terms of quality. It's cheap, which is not inherently a problem, but it certainly doesn't help when you run into the real barriers like acting, visual effects, audio quality, costuming and set design. But it's still probably watchable enough that I'm going to chuck it onto my Payday playlist.