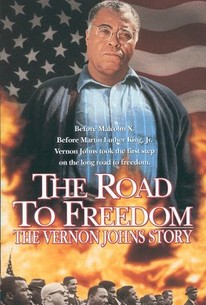 The Vernon Johns Story is the inspirational saga of the man who preceded Martin Luther King Jr. as pastor of a Montgomery, Alabama Baptist Church. Described as "one of God's most brilliant preachers," Johns campaigned tirelessly for Civil Rights long before the cudgel was taken up by the "mainstream." Before leaving his post, Johns passed the torch to young Reverend King, who is but a minor character in this positive, uplifting TV-movie. James Earl Jones curbs his tendency to ham it up as Vernon Johns, delivering an understated and most effective performance. The Vernon Johns Story was syndicated to local stations during the week of January 15-21, 1994.

Joe Inscoe
as Policeman
View All

There are no critic reviews yet for The Vernon Johns Story. Keep checking Rotten Tomatoes for updates!

Good movie about this early civil rights leader, and the roots of the civil rights movement. James Earl Jones hits the mark well with his commanding role, and immediately shows what an authoritative leader Vernon Johns really was.

Disappointing film about a seminal figure in the nascent civil rights movement. James Earl Jones played the title character with his usual passion. The barely controlled rage that was provoked by the blatant injustice of the Jim Crow south was wholly believable. Nicole Leach was very moving as the good Rev. Doctor's eldest daughter. Unfortunately, the rest of the cast was less capable. Still, the power of the story carried the film. I just wanted to like this more than I did. How ironic that the deacons found Rev. Johns' rhetoric to be too inflammatory and called Martin Luther King as their next pastor! Thank God for the courage of men like Vernon Johns who helped to ignite the civil rights movement. That legacy is an important chapter in our nation's history. Even though flawed, this film is important to our understanding of how far we have come, and how much further we must yet go to see "justice flow down like a river".