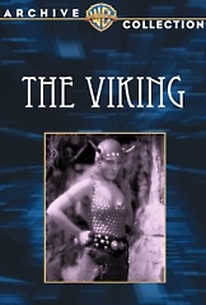 We are bound on the greatest adventure man has ever known and we do not turn back! Bold Leif Ericsson (Donald Crisp) sets sail from Norway to an unexplored New World. Aboard his ship is a Nordic beauty and an enslaved English lord. Ahead lie thrilling duels, turbulent battles and a passionate love quadrangle. A brawny silent-era epic, The Viking was the first film wholly shot in the improved two-strip Technicolor (R) process. When the industry later adopted the three-strip process, Crisp was still an actor of renown, co-starring in National Velvet, How Green Was My Valley and other popular films. In all, he appeared in or directed nearly 250 films during his remarkable seven-decade career.

Anders Randolph
as Eric the Red

Critic Reviews for The Viking

There are no critic reviews yet for The Viking. Keep checking Rotten Tomatoes for updates!

Audience Reviews for The Viking

There are no featured audience reviews yet. Click the link below to see what others say about The Viking!