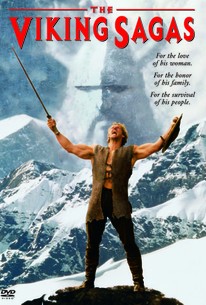 Former Mr. Universe Ralph Moeller stars as a Viking warrior in this epic, multi-generational account of the lives of the Nordic avengers. The story begins with the flight of Kjartan (Moeller) from the clutches of his mortal nemesis, Ketil (Hinrik Ólafson), a rather vicious lout. On a quest to avenge the death of his father, our hero unites with fellow good guys to combat his morally-impaired enemies, who are out for his head. Senseless violence, sweaty romance, and male bonding ensue.

Gunter Ziegler
as Viking on Roof

Gunnar Eyjólfsson
as Eirik the White

Jon Baldvinsson
as Thord the Strong

Critic Reviews for The Viking Sagas

There are no critic reviews yet for The Viking Sagas. Keep checking Rotten Tomatoes for updates!

Audience Reviews for The Viking Sagas

What gives this sword and sandal actioner it's real flavor is that it fairly reeks Nordic, from the locations to the accents and motivations ... you can nearly taste the history of the northern people's. ("Hmmm, it's a little rank ... ") Meanwhile the story is a typical one as a powerful baddie decides to take over by force, until a hero rises to ... I did say it was a typical story.