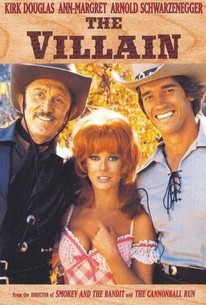 Also released under the title Cactus Jack, this western spoof follows the evil schemes of the villainous Cactus Jack (Kirk Douglas) as he attempts to kidnap the beautiful Charming Jones (Ann-Margret), only to be foiled by the heroic actions of a Handsome Stranger (Arnold Schwarzenegger).

Ruth Buzzi
as Damsel in Distress

Dick Dickinson
as Man in Bar

Richard Brewer
as Man in Bar

Budd Stout
as Blacksmith
View All

Critic Reviews for The Villain

Audience Reviews for The Villain

Pretty stupid but I guess I got a couple chuckles.

It's as silly as they come, this effort by Hal Needham, and you'll wonder what inducement served to bring Kirk Douglas and Ann Margret onboard this kiddie humor smorgasbord. Douglas spends most the film talking to his horse. .. and the horse gets all of the best lines. The plot? A lot of money is traveling cross country. Get the money. That's it. There's a snicker or two but ultimately it's a film that makes you mad cause it's so dumb.

This is supposed to be like a live-action Road Runner cartoon as Kirk Douglas' character is a version of Wile E. Coyote. Good funny comedy-western that brings good laughs.

Called "Cactus Jack" in the UK. Absolutely bizarre comic western, shot in a loony tunes style. Arnie is even more wooden than usual, and I couldn't quite believe Kirk Douglas got involved with this. Ann Margret looks nice though, and kids will probably get some enjoyment out of it.