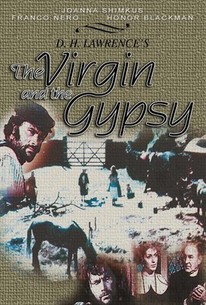 This melodrama is taken from a story by D.H. Lawrence. Yvette (Joanna Shimkus) and her sister Lucille (Harriet Harper) are two country girls who return home after attending a provincial school. Yvette is smitten by the sight of a handsome gypsy (Franco Nero). Her stern matriarchal grandmother (Fay Compton) objects, but Yvette continues to see the dashing young man who awakens her sexual curiosity. She is comforted by Mrs. Fawcett (Honor Blackman) and Major Eastwood (Mark Burns), two people living in sin, much to the chagrin of the moralistic townsfolk. Yvette and the gypsy finally engage in a forbidden romantic encounter after weeks of longing gazes and social disapproval from friends and family on both sides. ~ Dan Pavlides, Rovi

Critic Reviews for The Virgin and the Gypsy

At 31, Miles knows everything worth knowing about actors, if not about film. His water and fire symbols and andante flashbacks are modish and imprecise, but he makes his cast function with the proficiency and timing of a London rep company.

Audience Reviews for The Virgin and the Gypsy

There are no featured audience reviews yet. Click the link below to see what others say about The Virgin and the Gypsy!

The Virgin and the Gypsy Quotes