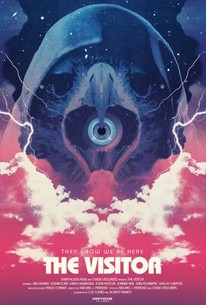 Critic Reviews for The Visitor

The Visitor doesn't come close to answering all the questions it raises, but that's the film's M.O.: If nothing makes sense, then nothing is off limits.

[It wows] cult fans, connoisseurs of the absurd, and cinephiles intrigued by the evolution of the sci-fi and horror genres in the '70s and '80s.

Perhaps the most fun you can have in a movie theater without risking permanent brain damage.

The great surprise is how, consistency be damned, these individual sequences fascinate.

The special effects are quite chintzy, Sam Peckinpah casts barely a shadow of humanity - and then there's the teeming flock of birds. This is Cheez Whiz that barely cuts it as a cult staple.

In The Visitor, logic and common sense are scarce and no one believes anything. [Full Review in Spanish]

I can't say that the bulk of 1970s psychedelia was necessarily successful - they were big on histrionics but short on actual logic - but one can at least admire them for being willing to tip into the surreal to reach something higher.

The Visitor is a terrible film.

The Visitor... is not the first Exorcist knock-off to come out of the Italian genre factory. It may, however, be the least coherent.

Lysergically painted-and-composited backgrounds & lo-fi light shows bring a striking if cheesy otherworldliness to the film's alien elements; and the film's cosmic duels are carried out neither with fire and brimstone nor laser guns....

It's a visitor from another world of filmmaking.

Audience Reviews for The Visitor

Not quite sure why I like this movie but I do. It's a fairly patchy and confused horror/scifi story with a very impressive cast and a strange compelling quality that makes the viewer watch to the end. Reminds me a little of some of the themes explored by the Blue Oyster Cult in song over the years. Despite its faults I rather enjoyed it.

Completely insane and what a cast! Not particularly good, but no self-described cinephile will be able to turn away.