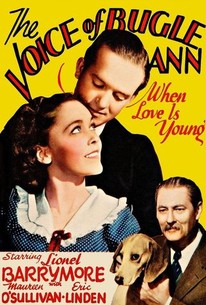 The Voice of Bugle Ann Photos

Based on the novel by MacKinlay Kantor, this 1936 drama from director Richard Thorpe stars Lionel Barrymore as Springfield Davis, an avid fox hunter in the Ozarks who relies on his loyal dog, Bugle Ann, to aid in his hunt. When curmudgeonly shepherd Jacob Terry (Dudley Digges) puts up a fence around his sheep, he announces that he'll shoot any dog that comes near his flock, despite the fact that Bugle Ann and the other hunting dogs haven't ever bothered the sheep. Fearful that the dogs could be injured by it in the darkness of night, the fence sets off a feud between the hunters and Jacob, which doesn't bode well for Davis's son Bengy and Terry's daughter Camden who have fallen in love. The situation comes to a head one night, when Bugle Ann suddenly turns up missing. ~ Matthew Tobey, Rovi

Frederick Burton
as The Warden
View All

Critic Reviews for The Voice of Bugle Ann

I thought the idea rather far-fetched in spite of all the talking that was done to make it convincing. In fact, the talking was the worst feature of the picture.

There are no featured reviews for The Voice of Bugle Ann at this time.

The Voice of Bugle Ann Quotes