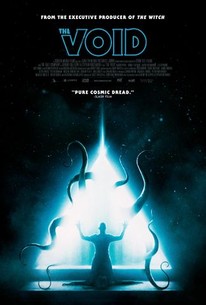 Critics Consensus: The Void offers a nostalgic rush for fans of low-budget 1980s horror -- and legitimate thrills for hardcore genre enthusiasts of all ages.

Critics Consensus: The Void offers a nostalgic rush for fans of low-budget 1980s horror -- and legitimate thrills for hardcore genre enthusiasts of all ages.

Critic Consensus: The Void offers a nostalgic rush for fans of low-budget 1980s horror -- and legitimate thrills for hardcore genre enthusiasts of all ages.

When police officer Carter (Aaron Poole) discovers a blood-soaked man limping down a deserted road, he rushes him to a local hospital with a barebones, night shift staff. As cloaked, cult-like figures surround the building, the patients and staff inside start to turn ravenously insane. Trying to protect the survivors, Carter leads them into the depths of the hospital where they discover a gateway to immense evil.

News & Interviews for The Void

50 Fresh Scary Movies and TV Shows to Watch on Netflix
Lion, Night of the Living Dead, The Salesman, and More on Netflix and Amazon Prime This Week
On DVD This Week: Get Out, Logan, and More

View All The Void News

Critic Reviews for The Void

"The Void" gets louder, grosser and more stupid the further it progresses, becoming an endurance test in its final sequences.

The resulting splatter is a bloody mess, which, if not a mass-audience spectacle, is exactly what these filmmakers were going for in the first place.

One of the more action-packed features to come from the current crop of John Carpenter-inspired filmmakers, The Void finds collaborators Jeremy Gillespie and Steven Kostanski going much further than many of their peers.

If only writer-directors Steven Kostanski and Jeremy Gillespie had lavished as much love and attention on plot and structure as they clearly did on production and theme, this ickfest might have been more than a nod to the gory glories of '80s horror.

People live, people die, monsters creep out of the shadows, but it's all a little too formulaic, cynical, and ... well, boring.

A lively, layered throwback to the days when splatter auteurs like John Carpenter, George Romero and Lucio Fulci ruled the drive-in.

They did have a good idea and a good premise... but it kind of lost momentum.

A visual hellscape bound to set up shop in your nightmares.

I can't promise that it will all come together and make sense after one viewing. The rewatchability factor is, I'm happy to report, extremely high...

It's an often riveting descent into darkness that will probably leave an impression on you on the other side... Just don't let its hyperbolic praise from some outlets make you put The Void on a pedestal - you'll likely come out disappointed.

The Void is by far one of the most fearsome, gross, gory and enjoyable films of the last five years.

Audience Reviews for The Void

I have mixed feelings on this film, on one hand the tone is dead on but on the other hand the film is flawed by a shallow plot line. The film has a very slow burning plot that doesn't resolve everything, I get ambiguous films but I like some information and conclusion. The filmmakers have a bright future and they accomplish a lot with a slim budget, that basement scene is terrifying, the one before the conclusion. I didn't quite get what the filmmakers had in mind for the storyline, lots of unanswered questions, maybe a sequel might be required. Not without moments, the film has a cult aspect that will help it survive in this current climate. The love for Carpenter, Gordon and Raimi is clear but those films had an intriguing hero at the helm.05-11-2017.

It's become apparent to me that the generation who grew up with the great cult-genre films of the 1980s are now grown up and wanting to make films of their own to attribute those classics. 'The Void' is just one such example of a genuine cult horror that feels as if John Carpenter or David Cronenberg could of made it way back in that day. Even with a film whose subject matter lingers on the absurd and truly terrifying death resisting views of the world that go outside our own perception, that still doesn't count how wonderfully weird this film really is. It's plotting involves a cast a characters caught up in desperate needs, going up against a force almost greater than nature, or human nature for that matter offering plenty of chills and gore laden insane cult-like occurrences. For that alone as the characters aren't as deeply developed as the best horror's are, I feel this film is as good as it gets when it comes to the content it's offering in the long run. With solid acting and a slick direction with plenty of amazing practical effects lane out for the devilish creatures and insane deaths what not to be entertained with in a film such as this. recommended for all cult fans young and old as it's that good.

An unsuspenseful and bore of a movie.