The Wagons Roll At Night1941 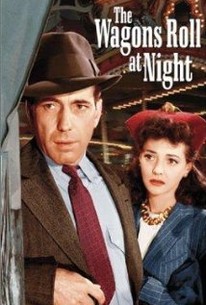 The Wagons Roll At Night Photos

In the 1930s and 1940s, Warner Bros. developed a positive genius for remaking earlier films in new, disguised fashion, retaining the plotlines but altering the circumstances and character names. Wagons Roll at Night was a 1941 reworking of the prizefight drama Kid Galahad, filmed only four years earlier. The original film was about a naive boxer who falls in love with the sister of his semi-crooked manager. The remake stars Eddie Albert as a bucolic lion tamer, Humphrey Bogart (who'd been the villain in Kid Galahad) as the circus manager, and Joan Leslie as the girl. The earlier film also included Bette Davis as the manager's put-upon mistress; her counterpart in Wagons Roll at Night is Sylvia Sidney as a worldly circus star. It's amazing how well the prizefight milieu adapts itself to the lion cage, and for this alone Wagons Roll at Night is memorable. ~ Hal Erickson, Rovi

Sig Rumann
as Hoffman the Great

George Ovey
as Boy
View All

Critic Reviews for The Wagons Roll At Night

The movie has great moments, in which the most sensational artists are the lions. [Full review in Spanish]

There are no featured reviews for The Wagons Roll At Night at this time.

The Wagons Roll At Night Quotes