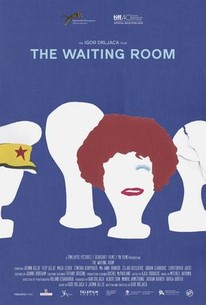 Jasmin, once a successful actor in former Yugoslavia, now lives in Toronto with his second wife and young son. While juggling a construction job and a busy audition schedule, he dreams of re-launching an old televised stage show that made him famous in his homeland. When he is cast in a role that triggers recollections of the civil war, he is forced to reconcile his current reality with memories of his past success.

Critic Reviews for The Waiting Room

Tinged with melancholy, even in its humourous moments, The Waiting Room is a moving exploration of one kind of Canadian immigrant experience.

Dominated by a unique blend of melancholy and existential crisis, The Waiting Room is a poignant character study about the immigrant experience.

The Waiting Room plays out like a kind of cinematic dare: is it possible to make a war movie that doesn't feature a single moment of armed conflict? In that respect, it's a success.

Even when The Waiting Room seems not to be saying anything, Jasmin expresses so much -- in expressing so little -- as to utterly beguile.

There's a stark beauty to cinematographer Roland Echavarria's imagery, and Geljo clearly knows his frustrated, melancholy character inside and out. But a couple of ill-advised choices let the air out of The Waiting Room in its final movement.

There are no featured reviews for The Waiting Room at this time.