The War Between Men and Women1972 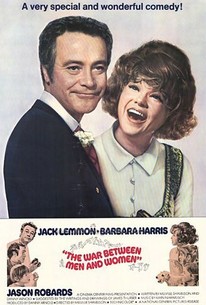 The War Between Men and Women Photos

Loosely based on the life and work of cartoonist and essayist James Thurber, The War Between Men and Women stars Jack Lemmon as cartoonist Peter Wilson, who, while visiting an eye doctor for his failing vision, quite literally stumbles upon Terry Kozlenko (Barbara Harris), an attractive but somewhat volatile divorcee with three children. Peter has a well-documented antipathy for women, children, and dogs, so everyone he knows is rather surprised when he finds himself falling in love with Terry -- and she falls in love with him. Peter and Terry get married, but her affection for him is not shared by her kids, who still idolize their father Stephen (Jason Robards, a successful photojournalist; Terry's dog doesn't care for Peter, either. When Peter's eye condition worsens, leaving him nearly blind, he suggests to Terry that she should go back to Stephen for the sake of her children, only to learn that Stephen has been killed while on assignment. Peter is now the only father the children have, and he's forced to find a way to reach out to them. The War Between Men and Women's interpolation of Thurber's life and work, using both live-action and animation, was inspired by a respected but short-lived television series, My World and Welcome to It, in which William Windom starred as Thurber. ~ Mark Deming, Rovi

Critic Reviews for The War Between Men and Women

[W]hat differentiates [The War Between Men and Women] from the Knocked Ups of the world is how uproarious the funny parts get, in part because they're so daringly nasty, and how authentic and well-earned the ending seems by comparison.

All of the performances are excellent, especially those of Lemmon.

Audience Reviews for The War Between Men and Women

Jack Lemmon tries his best to warm us up to this ever-so-cynical, dyed-in-the-wool cynic, but its an all uphill job as he plays a cartoonist interrupted by love. I kept asking myself why does Harris' character put up with him? The story here seems all over the place and perhaps there were too many cooks on the job. Whatever, save this uncomfortable-to-watch bit for a rain day. And the James Thurber connection is best left forgotten.

A predictable romantic comedy with a couple of good actors. It's a pretty modern story, for it's time, and the "battle of the sexes" type story is sort of interesting. Overall it's just okay.

The War Between Men and Women Quotes