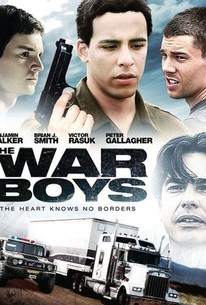 Three childhood friends who once made a game out of chasing illegal immigrants back across the border discover they're no more impervious to tragedy than the people they tormented when a quick moneymaking scheme turns suddenly treacherous. Back in high school, Greg, David, and George used to stake out the U.S.Mexico border, harassing desperate immigrants as they attempted to pass through. When David departed for college the group was split up. But now David's returned, and he's got a plan to heist a truckload of stolen televisions from his father, the owner of a trucking company that dabbles in black market luxuries. If they can turn the televisions around fast, reasons David, they can move to New York City and start a new life. As the plan gets underway the three friends begin to mature, and find their loyalties shifting while becoming more sympathetic to the plight of illegal immigrants. When the cargo of the truck proves to be something far more malevolent than television, the three friends realize that they may have finally gotten themselves into a jam they can't walk away from.

Critic Reviews for The War Boys

There are no critic reviews yet for The War Boys. Keep checking Rotten Tomatoes for updates!

Audience Reviews for The War Boys

There are no featured audience reviews yet. Click the link below to see what others say about The War Boys!