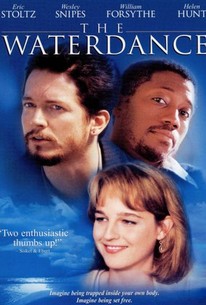 Paralyzed in a 1984 accident, writer/director Neal Jimenez (of River's Edge fame) channelled his own experiences and emotions into his 1991 film Waterdance. Eric Stoltz stars as a young writer left incapacitated by a hiking accident. He is placed in a paraplegic ward, peopled by patients of all races and emotional states. Together with his new-found friends, Stoltz rebels against the hospital system and his own debilitation. Helen Hunt and Wesley Snipes are among the costars in this effective update (though not a remake) of 1950's The Men. Waterdance was given a brief theatrical release in 1992 before being telecast on PBS' American Playhouse in early 1993.

James Roach
as Guy in the Electronic Wheelchair

William Forward
as Cop
View All

Critic Reviews for The Waterdance

Films are so often about big, dumb conflicts and predictable conclusions. The Waterdance is about the everyday process of continuing one's life under a tragically altered set of circumstances.

The Waterdance is one of the most realistic films ever released dealing with the subject of adjusting to life with a spinal cord injury.

All of this is played out with poignancy, realism, humor and touches of poetry by a devoted and varied cast.

What's most striking about the film is its meticulous attention to detai, authenticity, and tight focus: This is the story of 3 ordinary guys, not war heroes, who happen to be in wheel chairs; Jimenez based the script on his personal experience.

A well-acted, deliberately paced drama about the sometimes stark realities of paralysis.

A paraplegic squares off against fear, anger, loneliness and despair.

A film of stellar performances. Stoltz is nothing short of sensational.

An experience from a gifted writer telling a story from personal experience, as opposed to some hack culling together a melodrama about how sad it is to be crippled.

Audience Reviews for The Waterdance

Stoltz does a good if not great job of telling the store of Neal Jimenez and his experiences in becoming paralyzed. As I said, good, not great.

Good performances, and actually quite funny in places.