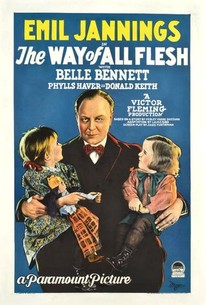 Critics Consensus: A weakness for melodrama dampens its impact, but Emil Jannings' outstanding performance makes The Way of All Flesh worth following.

Critics Consensus: A weakness for melodrama dampens its impact, but Emil Jannings' outstanding performance makes The Way of All Flesh worth following.

Critic Consensus: A weakness for melodrama dampens its impact, but Emil Jannings' outstanding performance makes The Way of All Flesh worth following.

The Way of All Flesh Photos

Bank clerk August Schiller (Emil Jannings in his American screen debut) is known as a model husband and father. His idyllic life abruptly changes when he is sent from Milwaukee to Chicago to deliver a packet of bonds; it is first time on a solo trip since he married his wife years before. There he meets a seductive young woman who plies him with liquor and steals the bonds. Later, she calls in her beau to beat up August. During the scuffle, the thug is killed. Wanting to protect his family from scandal, August dons the crook's clothing and disappears. Meanwhile the papers announce his courage in death. Over the years, his life goes into a rapid decline until the penniless August is forced to live on the streets. One day, he learns that his son has become an internationally famous violinist. Poor August is barely able to beg people into giving him enough money to buy a ticket. The story ends on a windy Christmas morning with the decrepit and sorrowful August staring wistfully through a window pane at his happy warm family's celebration.

Fred Kohler
as The Tough

Philippe DeLacy
as August, as a child

Critic Reviews for The Way of All Flesh

Great care has been shown in the backgrounds for this photodrama and meticulous attention to detail has been exercised.

Are the early and middle portions of the picture good enough to outweigh the atrocious third section in which every known tear-inducer but the homely onion is tossed at the audience? Thinking it over calmly, we are inclined to answer in the affirmative.

The producers have been so much afraid of launching the European Jannings without sufficient ballast of American hokum... that they have wasted much first-rate ability on what is essentially a maudlin film.

The Way of All Flesh, poignant, powerful melodrama... proves only what we already know -- that Jannings is the greatest of all character actors among us.

[Jannings] has the Chaplin humor and far more than the Chaplin pathos... He is a better villain than Wallace Beery. He rivals Chaney In the art of makeup. He is a composite of all the great, and himself the greatest of all.

This film matters, because it foreruns a new, serious, and honourable kind of popular tragedy, using popular emotion, not exploiting it. Dignity has come into the American commercial film, and Vic Fleming deserves some credit for it.

Jannings is incomparably the greatest of all screen actors, unless it be that the aforesaid Charles Spencer Chaplin can tie him.

Mr. Jannings is as good as he was in The Last Laugh and Variety, if not better; the picture itself, while not quite up to the high level of these two outstanding instances, is creditable and admirable.

Even the artificialities of Hollywood have not yet touched the fine acting of Jannings, as is proved by his excellent character work in The Way of All Flesh.

It is a wonderful story, wonderfully portrayed, and provides a worthy medium for the genius of Emil Jannings.

The Way of All Flesh might be your story or mine. Its setting might be our homes, and our families might be its characters. It is the unsuspected drama that walks past us on the street and the mute tragedy one reads in the eyes of old men.

The Way of All Flesh is a saga of sacrifice, the coming of temptation in the life of a simple, home-loving man -- a powerful lesson on the frailty of mankind.

There are no featured reviews for The Way of All Flesh at this time.

The Way of All Flesh Quotes