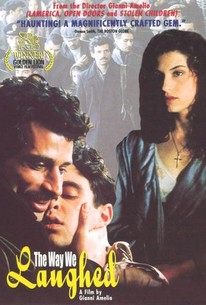 Gianni Amelio directed this powerful drama that focuses on the relationship between two brothers as their goals and ideals drift apart over the course of seven years, each of which is represented by a single day. Giovanni (Enrico Lo Verso), an uneducated laborer from Southern Italy, arrives in Turin, where his younger brother Pietro (Francesco Guiffrida) is studying to be a teacher. Giovanni sees the bright Pietro as his family's best hope for making their way out of poverty, and he goes to work to support his brother so that Pietro can focus on his studies. But as time goes on, Giovanni's simple dream of a better life proves to be different than Pietro's personal ambitions, and as the corruption of the city begins to sink its hooks into Pietro, their fates take a tragic and dangerous turn. Cosi Ridevano won the Golden Lion award at the 1998 Venice Film Festival, but despite enthusiastic reviews in Europe, the film did not receive an American release until 2001.

Rosaria Danze
as Lucia
View All

Critic Reviews for The Way We Laughed

To watch Gianni Amelio's luminous The Way We Laughed is to reconnect with Italian cinema in all its richness of emotion and command of expressive gesture.

A haunting, richly textured film that, like the Italian director's unforgettable Lamerica, dramatizes the plight of poverty on an epic scale.

... a masterpiece about filial love and the horrors of poverty.

This is the kind of European film you rarely see anymore, with characters and circumstances that are easily debatable. Two viewers may never reach the same conclusion about the film.

The making of this picture is so sure that hope for Amelio, for his future, is almost forced on us.

More frustrating than gripping thanks to the fractured, often confusing narrative and the director's pro-pensity for extremely long takes.

It's a damn impressive trick to build a film around narrative frustration and not cause your audience to run out screaming.

An unusual, tremendously moving film that nicely assumes we can read between the pictures.

Amelio ... understands the loneliness, suspicion and uncertainty that plague immigrants in a land where they can't get familiar work or speak a familiar tongue.

It's tragic, sad and deeply moving.

Beautifully made and performed, this is a film of considerable insight into both the life of the impoverished and the mystery of human personality.

The absorbing tale, in the rich dialect of Southern Italy (and not in standard Italian), is ... well-written and acted.

Audience Reviews for The Way We Laughed

There are no featured audience reviews yet. Click the link below to see what others say about The Way We Laughed!

The Way We Laughed Quotes