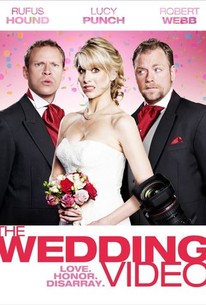 THE WEDDING VIDEO is an uproariously funny comedy about every bride and groom's special day. When Raif (Rufus Hound) is asked to be the best man at his brother Tim's (Robert Webb) high society British wedding, he decides to make a no-holds-barred documentary of everything that happens leading up to the big day and give it as a gift to the happy couple. As the moment of matrimony approaches, nothing seems to be going according to plan, leaving the bride (Lucy Punch) and groom to wonder: "Whose wedding is this anyway?" Filled with a colorful and hilarious cast of characters, this is one wedding you won't soon forget! (C) Level 33

Matt Berry
as Roger
View All

News & Interviews for The Wedding Video

View All The Wedding Video News

Critic Reviews for The Wedding Video

The premise wears thin after a while and the humor is hit-and-miss, but when it's on its game "The Wedding Video" can be laugh-out-loud funny.

This wedding comedy ought to be funnier and more lively than it is.There is, however, a good idea at its centre.

We get one or two outrageous sight gags and massive "getting progressively drunk" montages, and some neatly managed comedy on the laugh-with/laugh-at borderline.

It gets by more on goodwill than inspiration, but it's lightly amusing and well played.

This homegrown romcom is pretty much doomed from the start.

Not quite Four Weddings-funny but always entertaining and endearing in equal measure. Less so if you're preparing for a wedding.

The comedy is never hearty enough to be truly enjoyable, only managing a chain reaction of titters at best.

Supremely well-intentioned, low-budget British comedy which, with all the will in the world, a likeable cast can't quite power to greatness.

Still has lots of very funny moments and a realistic interpretation of the lengths some people go to when confronted by a camera lens and under ... pressure to perform.

It's not a bad production, but the excitement of its concept soon wears off - largely because wedding movies are so old hat these days. And who wears old hats at a wedding?

Except for a very silly ending, his film goes down as easily as a glass of bubbly.

Audience Reviews for The Wedding Video

About as hit-and-miss and inconsistent as a rom-com can be to be quite honest. There are some definite truths about the film as a whole about how sometimes the people themselves getting married aren't even sure if they're doing it for the right reasons, people making decisions for the couple that they have absolutely little to no input on. Of course it does so in a way that is silly and sitcom-y, but there's some good themes at its core here. Perhaps they're not as explored as well as they could be considering that the movie was meant to be light, breezy and easy to watch as opposed to making you think about the institution of marriage as a whole. But, as I mentioned, the film isn't exactly the most consistent of comedies. Like there's some bits that are great, and a lot of them involve Jenna, the wedding planner, and there's others that just fall flat on their face. For example the whole bit with the priest who always laughs at his own jokes. It works the first time, but it's not like tears are coming out of your eyes. You think that's cute and you move on from it. It's not like they beat it dead by doing the same joke, say, 8 times in the film. But they do it enough that it's, obviously, the law of diminishing returns and it's not nearly as funny. Hell, after the first one, I wouldn't have called them funny at all. It just seems too forced and contrived really. It's not really the only part of the films that comes across this way. With films whose comedic stylings resemble more sitcom-y type antics, as opposed to borrowing influence from the classics or more dialogue-driven films, that contrivance is somewhat inevitable. That doesn't mean it can't be good when done correctly, however. I don't have a problem with the film relying so much on this as much as I do with the film just not being consistent from beginning to end. There's just some lines that, if I had seen this in a theater, I probably could've heard atoms moving instead of uproarious laughter. The cast, however, is pretty damn good all things considered. Lucy Punch is always great. The one who stole the show, however, would definitely have to be Michelle Gomez who played, as mentioned Jenna the wedding planner. She definitely got the most laughs out of me than anyone else in the entire film. Not that I think the movie is bad, because it's not, it's almost good actually, but if someone could put all of Jenna's scenes into one video and post it on YouTube, then I'd suggest watching that instead of the entire film. That might come across as an insult, but it's really not. It's just that the film is, honestly, an incredibly frustrating mixed bag. At least Jenna's appearances, to me, were always funny. I was never not entertained by Jenna. With that said, while there are parts of the film that are good, the cast, for one, is really quite excellent. The writing, however, is a huge letdown. Talk about peaks and valleys. Still a decent movie overall, but one I wouldn't recommend due to its pronounced inconsistencies.

"We're trying to organize our wedding and you're treating it like it's some big party" Webb fumes at Punch in the movies one funny line. It's a line that condenses the message behind the film. The idea of a wedding ceremony is absurd when you think about it yet so many people become consumed by this ritual to the point where more work is often put into having a successful wedding than a successful marriage. It's an easy target for comedy but the writer of this, Tim Firth, seems clueless as to how to raise more than a handful of mild chortles from the subject. The found footage genre has long been thought compatible only with horror. I could be mistaken but I think this is the first time it's been employed in the service of a comedy, if you discount mockumentaries like "Spinal Tap". The technique should fit the comedy genre like a glove as it gives film-makers a lot more options when it comes to provoking laughs. No longer do you need worry about breaking the fourth wall as the fourth wall conveniently doesn't exist therefore the audience can be addressed directly ala "Annie Hall". Director Cole never makes sufficient use of the tool he's employing and the handheld camera becomes less relevant as the film progresses. By the end you'll have forgotten this is meant to be a found footage film, and not because the story is gripping. Britain has an abundance of good comic actors but a drought of decent comedy writers. Americans are often accused of lacking irony but I've yet to see British comedy that can compare to the likes of "Curb Your Enthusiasm", "Frasier" and "The Larry Sanders Show" when it comes to writing which is both hilarious and sophisticated."The Wedding Video" sets out to be a witty critique of social norms and snobbery but lacks confidence in itself and it's audience, ultimately lowering itself to dick and bum jokes.